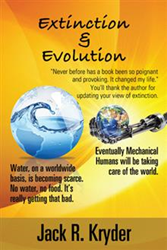 Jack R. Kryder spent almost one full year researching the effects of pollution and the coming shortages of resources. In his new book, “Extinction & Evolution” (published by iUniverse), Kryder summarizes the findings of hundreds of scientists, engineers, government organizations and environmental groups that say the level of pollution human existence has generated and the shortages that will occur because of humankind’s depleting all required natural resources needed to survive is a form of self-annihilation — basically extinction of the human race.

In addition to studying and researching the possibility of extinction, he studied and researched the development of technology that is rapidly producing mechanical devices with superior intelligence compared to humans that will have the capability of replacing humans and which he predicts is sure to happen.

Kryder suggests that the two will come together at about the same time — when humans disappear is about the time mechanical humans will be functioning as our replacement. It’s evolution in its purest form.

Kryder considers himself a reporter. Over half of his book is devoted to a Research Appendix where he lists many of his sources where he drew his conclusions from. They are made directly accessible to the reader on his website: http://www.worldnews.earth.

About the Author
Jack R. Kryder was a computer technologist for 50 years. This is his first book.