Robert Lomax, author and psychic channeller, brings the messages and wisdom of his alien spirit guides to the world in ‘Consciousness and the Alien Mind.’ 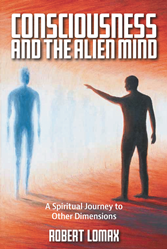 "Consciousness and the Alien Mind" by Robert Lomax.

“I think if everyone in the world was more open to receiving the gift of spiritual assistance and direction from benevolent soul beings, we might be a more peaceful and more enlightened society,” says Lomax.

For years, Robert Lomax has experienced channeled and telepathic messages from humanoid spirit guides about the multidimensional nature of the soul and experiences which can only be witnessed beyond the human realm. Lomax is enthusiastic to share with the world the knowledge and enlightening wisdom that his alien guides have given him in his new book, “Consciousness and the Alien Mind: A Spiritual Journey to Other Dimensions.”

In the book, Lomax transcribes his conversation with his Andromedan guide Antemedi about the meaning and reality of humanity from an extraterrestrial perspective. His dialogue with Arcturian guide Orlacka, who has the ability to traverse across different planes, discusses the human god concept and provides tools for people to comprehend and unlock a higher, multidimensional state of enlightenment.

Over a period of more than 25 years, Lomax, Antemedi and others have discussed a myriad of topics such as the alien perspective on human spiritual and scientific evolution, humans’ role in the universe and other ideas and knowledge that, without the tutelage of spirit guides, would be impossible for humans to comprehend and interpret.

The majority of alien contact happens on higher mental frequencies and most people who have had contact with aliens struggle to prove their experiences to skeptical audiences. Nonetheless, Lomax believes the messages coming from these other dimensions are too important to cast aside. “I think if everyone in the world was more open to receiving the gift of spiritual assistance and direction from benevolent soul beings, we might be a more peaceful and more enlightened society,” he says.

One reviewer praises the book: “A captivating read that enhances the senses and challenges the mind… It is fascinating joining Robert on a journey through different levels of awareness, experiencing communications with the alien minds of Antemedi, Orlacka and Gulwah.”

“Consciousness and the Alien Mind” is sure to challenge readers’ beliefs and perspectives of the world we live in and the energies that guide us through our lives.

About the author
After his son died in an accident at less than a year old, Robert Lomax experienced the reawakening of his childhood psychic abilities and passion for painting. This reignited spiritual contact enabled him to spend more than two decades encountering and working with his spirit guides, depicting on canvas the messages channeled through him and looking at his existing thought-processes in the context of self and beyond. Throughout this period, he has given his time freely to help bereaved people and provide spiritual healing to others. Lomax and his wife live in Norfolk and have three children and a grandchild. To learn more about Lomax and his book, please visit his YouTube channel or website, http://www.roblomax.co.uk.