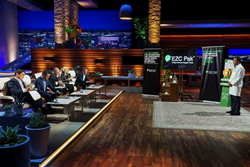 I went into the tank, executed our game plan, and walked away with the handshake.

Dr. Malepati negotiated a $125,000 investment for a five percent stake in his award-winning brand. As part of the deal, Mr. O’Leary’s Shark Tank holding company O’Leary Ventures will receive a $450,000 royalty on sales for providing EZC Pak access to its vast marketing, public relations, and financing expertise. “In business, sometimes you cut good deals and sometimes you cut bad deals. In this case, it was a great deal for both sides. Everyone loves win-wins. We look forward to continuing to drive the EZC Pak story forward under the advisory and partnership of Kevin O’Leary and the highly talented team at O’Leary Ventures,” said Malepati.

The EZC Pak creator also thanked the Shark Tank production team. “Shark Tank is an iconic American television show that has inspired and entertained millions. Their production runs like a well-oiled machine. It is no surprise that they continue to win multiple Emmy Awards. My sincere thanks to ABC, Sony MGM, Mark Burnett, Clay Newbill, Yun Lingner, and the entire Shark Tank crew for providing us the opportunity to discuss a very serious public health problem. They produced a memorable segment that will be discussed at homes and offices for years to come.”

The episode was not without its spicy share of controversy however, as Sharks Mark Cuban and Lori Greiner lunged hard early at the physician entrepreneur. The Dallas tech billionaire and LA surgeon, who grew up in rival neighborhoods in Pittsburgh, clashed in a heated exchange over the root causes of the antibiotic overuse problem, while Greiner accused the doctor of chauvinism in the tank. “Lori Greiner is one of the most gifted entrepreneurs and public figures in America. Her track record of leadership, success, and service to others has been an inspiration to me. She is someone I respected highly before walking on set and continue to hold in the same high regard today,” said Dr. Malepati.

“As a person of color and someone who’s gone through life with a foreign sounding name, I know what it feels like to be slighted and overlooked. I am sensitive to that. It was never my intention to avoid eye contact with any of the Sharks, but I understand that’s how it was perceived and I apologize. Shark Tank is a very difficult format, as five people with the power to change your life are all speaking at the same time,” said Malepati.

“Shark Tank fans know well that you only have six minutes in the tank. Everything can end in two minutes if you’re not prepared. You must have a clearly defined strategy to swim or you will sink. I brought in the best people in my circle and trained hard with them. I did my homework about the Sharks to identify the one that fit the company’s needs best. Through this process, it was clear that Kevin O’Leary was the right partner to help grow EZC Pak into a global brand. I went into the tank, executed our game plan, and walked away with the handshake I sought,” said Dr. Malepati.

"Finally, my thanks and love to my wife, family, the entire EZC Pak team, as well as our investor group for their patience and belief in me, this company and our continued journey in eradicating the overuse of antibiotics. We continue to march forward in saving antibiotics now and for future generations, and as many lives as possible. The past twelve months have been very challenging. You have all worked very hard, so savor the flavor tonight! You deserve this win. In the morning, flu season is upon us and it’s time to get back to work!” said Malepati.

About Shark Tank:
Shark Tank is an Emmy Award-winning American reality television show featuring
rising entrepreneurs pitching their ideas to the sharks in the tank -- five titans of industry who made their own dreams a reality and turned their ideas into lucrative empires. The contestants try to convince one of the sharks to invest money in their idea to build their own company. For more information, visit abc.com/shows/shark-tank.

About EZC Pak:
EZC Pak is the first physician formulated Immune Support Pack composed of certified organic Echinacea, Zinc, and Vitamin C designed to reduce the problem of antibiotic overuse in colds and flu. EZC Pak is a National Partner of the CDC's Be Antibiotics Aware Initiative. For more information on where to buy EZC Pak in your neighborhood, please visit the store locator at ezcpak.com.