F. M. Levy’s newly released “The Missionary Kid” is a profound testimony of growing up in a God-centered journey and a fulfilling missionary service

“The Missionary Kid” from Christian Faith Publishing author F. M. Levy shares an epic missionary journey of a young boy following his upbringing, the challenges he faces, his relationships with people, and his walk as a servant of the Lord. 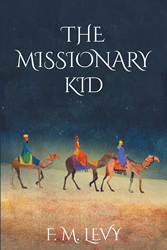 “The Missionary Kid”: a beguiling narrative that tells the story of a child who dreams of becoming a missionary and begins to pursue a life of servitude starting in his youth and towards adulthood. “The Missionary Kid” is the creation of published author F. M. Levy, a writer who has a fine education and holds a master’s degree, a Bible certificate, a writer’s certification, and has completed real estate investment courses.

Levy shares, “A lad is inspired to become a missionary and do great things for the Lord because of his early training in evangelism. He goes to church a lot with his parents and reads the Bible every day and prays to God every day. He pursues all angles until his time is ripe. Along the way, some notorious people enter like Rock Starr, The Holy Rollers, Sir Paul Majesty, Rick Sparkles, John Jones, and Jorge Halliday; and actresses Sophia Russo and Jayne Marvel. This makes for hot and torrid action. They want in. A well-known capitalist industrialist wants to be a missionary too, counter opposed to the missionary kid. So, what is it going to be and who will get the mission impossible?

“The action includes the missionary kid’s childhood background, his trials and tribulations, his experiences with his friends, encounters learning about who God is. He makes missionary trips with his father. Later, the bigger missionary trips are in South America. Now, they go out into the field and knock on doors, speak to people, and get many of them saved.

“Rothwell, the capitalist, is also there trying to be a missionary. Stay tuned and find out who has more moves than a bowl of Jell-O and who wins out! Be there, same time and same station.”
Published by Christian Faith Publishing, F. M. Levy’s new book shares an awe-inspiring tale for the readers who have a heart for missions and service. This literary work is made to help share the good news of God and His grace in a journey of one individual.

View a synopsis of “The Missionary Kid” on YouTube.

Consumers can purchase “The Missionary Kid” at traditional brick & mortar bookstores, or online at Amazon.com, Apple iTunes store, or Barnes and Noble.

For additional information or inquiries about “The Missionary Kid,” contact the Christian Faith Publishing media department at 866-554-0919.