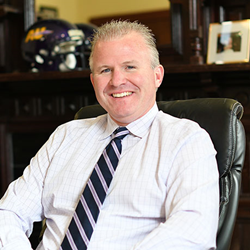 “We are very excited to welcome Jason Amore to FDU,” said President Christopher Capuano. “He has an outstanding record of success and brings to FDU a strong passion and contagious enthusiasm for supporting students through philanthropy."

Amore has more than 20 years of higher education experience, highlighted by the development of a billion-dollar capital campaign at the University of Louisville; the cultivation and closing of more than $230 million in philanthropic giving; significant major gift, estate, corporate and foundation giving experience; and the management of annual giving programs.

“We are very excited to welcome Jason Amore to FDU,” said Capuano. “He has an outstanding record of success and comprehensive knowledge of all aspects of development and fundraising. He also brings to FDU a strong passion and contagious enthusiasm for supporting students through philanthropy. I am certain that he will continue the University’s momentum and provide the leadership necessary to successfully complete our historic $125 million campaign and raise philanthropy at FDU to yet another level.”

At Alfred University, where he has served since 2017, Amore has more than doubled the annual rate of philanthropic giving; secured $36 million in major gifts; led the planning of a $200 million campaign, which is more than halfway toward its goal while still in the silent phase; established alumni advisory councils that support academic programs and leadership advisory councils for alumni in key markets; and reinvigorated Alfred’s reunion, homecoming and hall of fame programs, increasing attendance by 200 percent.

Amore holds a Master of Professional Studies and a Bachelor of Arts, both from Alfred University.