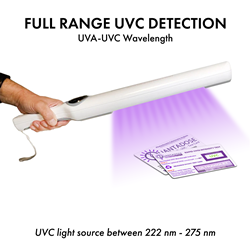 According to QuantaDose, the manufacture of the world's first and only reusable UVC wavelength indicating UV intensity test cards, people worldwide are pulling together to fight fake UV virus protection as a matter of life and death.

Wednesday, the New York Times reported at least 3,011 Americans died, by the end of the week, Johns Hopkins researchers say 3,309 died on Friday, making it the worst single day of the pandemic. More Americans died Friday than on D-Day or 9/11.

Social media influencers to large and small companies have taken a front-line position to prevent consumers from becoming victims of something far worse than a scam.  Selling a false sense of protection with fake UV sterilization isn't just deceptive business; it can be deadly for many people during a pandemic.

"Thank God for the people that can make a difference are doing their best to fight the fakes. Doctors, online influencers, small and large businesses, even groups and individuals on crusades to stop fake imported goods are all trying to get the word out before lives are terribly impacted by these dubious companies pushing UV-C light products for virus protection that sometimes don't even emit UVC light," said John Coates, CTO and senior research scientist at Quanta X Technology.

One such company is Western Technology, Inc., world-class manufacturer for industrial safety lighting for over 42 years. WT started production of the new WT GERM KILLER®, a 275nm peak germicidal UVC wavelength emissions from a compact UVC light system, which could be the most powerful handheld UVC LED light array with a single charge lasting about 4-hours at high power.

In the video titled, "How do I know if germicidal UVC light is being emitted?" the QuantaDose UVC test card provides effortless results in demonstrating to youtube fans how the QuantaDose readings appear almost instantly from powerful UVC dose and strong UVC intensity.

Webb said, "Everyone at QuantaDose is grateful for the support we've received to make reusable UVC detection technology even better. At the same time, many prefer not to use commission links when informing fans and followers. But now, the option exists for companies like Western Technology or businesses like WeBeFit Gym to YouTube Influencers and individuals can all start earning up to 20% per referral sale with affiliate links to QuantaDose.com in a combined effort to help consumers find real UVC lighting that is powerful enough to really protect them in crisis."

QuantaDose UVC test cards can be purchased online from the company’s website at https://www.quantadose.com.