When they take everything away, what does she have left? 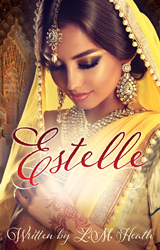 Don't let what's around you dictate your beliefs and abilities.

After their parents’ death, Estelle and her brother are separated and forced to learn to serve the emperor. Do they forget the emperor’s misdeeds and accept the life laid out for them? Or do they resist and risk losing their own lives?

“This story is about overcoming the past and moving into the future. I believe readers will be able to relate how the characters are discovering more about themselves. Don't let what's around you dictate your beliefs and abilities,” said Heath.

L.M. Heath received a Bachelor of Liberal Arts in Journalism and English at Malone University in Canton, Ohio. She has written several short stories, poems, and plays. Estelle is her first novel.

Xulon Press, a division of Salem Media Group, is the world’s largest Christian self-publisher, with more than 15,000 titles published to date. Estelle is available online through xulonpress.com/bookstore, amazon.com, and barnesandnoble.com.