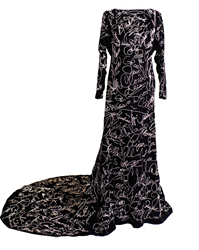 The Graffiti Gown took over 25 years to make, has over 360 Hollywood leading lady autographs hand beaded and became an international symbol for AIDs awareness

The Hollywood Graffiti Gown has never been sold at auction and will be sold to the highest bidder on Saturday at GWS Auctions. The dress was designed by Hollywood's Jeran Designs and all proceeds will benefit AIDS research.

Classic Gowns Worn by Hundreds of Stars Exclusively Created by the “Glamour Kings of Hollywood” Will Hit the Auction Block Before a Host of Celebrities and the General Public in a Runway Fashion Show Auction on November 9, 2019 at Hollywood’s Hard Rock Cafe

Los Angeles, California –– It took over 30 years to make and carries over 360 hand-beaded signatures of some of Hollywood’s most fabulous leading ladies, as well as women in culture and politics– the once missing “Hollywood Graffiti Gown” is legendary, and unbelievably, no one knew where it was for almost the last decade. It was designed by the Glamour Kings of the 80s and 90s, Jeran Designs’ Jerry Skeels and Randy McLaughlin, and was the culmination of their dream and passion to raise awareness during the AIDS crisis in the 1980s and 90s. On Saturday, November 9, 2019 Kruse GWS Auctions will auction this timeless gown among 175 others crafted by the award-winning designers during the “Jeran Designs Couture Vault and Fine Jewelry - Runway Fashion Show Auction.” Kruse GWS Auctions will also be offering a selection of fine jewelry carefully curated to highlight the beauty of each look. The lead auctioneer and an esteemed team of fashion experts spent over 100 hours to match specific, fine jewelry pieces to accentuate each piece. The high-profile, haute couture auction will take place at the Hard Rock Café Hollywood beginning at 10:00 a.m. PT.

The “Hollywood Graffiti Gown” is as legendary as the over 360 women—a who’s who of movie, television, culture and politics—whose signatures adorn a painstakingly created, hand-beaded gown three decades in the making. The gown was unveiled March 13, 2014 at the Academy of Television, Arts & Sciences Ribbon of Hope event as a fundraiser for HIV/AIDS awareness. The gown has traveled the world as a symbol of hope, from La Paz, Bolivia, to the Hollywood Museum in Los Angeles. A documentary about the making of the dress is available at: https://m.imdb.com/videoplayer/vi771623193

Other highlights of the vast couture collection include the famed Jeran Designs red gown worn by Dame Joan Collins on her December 1983 Playboy Magazine cover. Collins in the dazzling gown remains one of Playboy’s most iconic covers. The auction also highlights an original Jeran Designs hand-beaded black “Art Deco” gown most recently worn by The Supremes’ Mary Wilson at a red-carpet event in Hollywood.

The auction will feature a live runway fashion show to bring these pieces to life for the bidders on auction day. The sheer number of famed designers, beading experts, production staff and celebrity attendees ensures this is an auction event the world will never forget. Kruse GWS Auctions believes this auction will attract some of the most in-demand stylists in Hollywood as award and red-carpet seasons are just around the corner.

A red-carpet arrival will take place prior to the auction and will include such famous Jeran Designs’ devotees such as: The Supremes’ Mary Wilson, Motown’s Karla Gordy, Beverly Todd, Pamela Clay Iris, Freda Payne, Marla Gibb, Tracey Bregman Recht and Katharine Bauman. More stars attending the event will be announced throughout the next coming weeks. Kruse GWS Auctions is extremely honored to present such an iconic collection to a vast list of beloved celebrities as well as the general public in this truly unforgettable event.

“There is no doubt that Jerry Skeels and Randy McLaughlin of Jeran Designs created some of the most celebrated gowns and ensembles for Hollywood’s most important ladies,” said Brigitte Kruse, Founder of Kruse GWS Auctions. “Their exquisite attention to detail, fine craftsmanship and their unmatched passion for perfection exudes in every facet and every bead of their designs. This is what made them the most sought-after designers of the 80s and 90s. Their creations can be seen on hundreds of red carpets, on the big and small screen and in museums. I am deeply humbled to have been entrusted with this very important task to sell such a historic collection. Kruse GWS Auctions will honor the Jeran Designs Legacy on November 9th, 2019 at the Hard Rock Café in Hollywood by making this an event our bidders worldwide will never forget.”