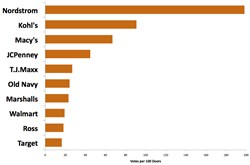 As we see with strong performers like Nordstrom and Kohl’s, service-oriented factors like generous return policies and friendly associates breed customer satisfaction and loyalty

Nordstrom is North America’s overall favorite fashion retailer for the second consecutive time, according to a new study of more than 6,800 consumers conducted by Market Force Information, a worldwide leader in customer intelligence solutions. Kohl’s is the most visited for casual clothing, business attire and children’s clothing, while Dick’s Sporting Goods won out for sports apparel and DSW for footwear.

Market Force’s study was designed to uncover which fashion retailers consumers prefer and why, as well as which stores are most popular across five clothing categories. Market Force first calculated the rankings based on total votes, and then factored in the number of locations for each chain for a weighted view of the results. Only chains that received at least 200 votes were included in the analysis.

Overall Favorite Fashion Retailers
When Market Force asked consumers to name their overall favorite retailer, Nordstrom ranked No. 1, earning significantly more votes than all of the other chains. Kohl’s ranked second, Macy’s was third, JCPenney was fourth and T.J.Maxx was fifth. See Graph 1.

Nordstrom Stands Out in Service and Atmosphere, Ross for Price
Market Force also looked at why shoppers prefer one store to another and, not surprisingly, Nordstrom was also a favorite across many of the service-oriented attributes. It ranked highest for store atmosphere (64%), return policy (59%), helpful associates (56%), friendly associates (52%), knowledgeable associates (50%), and having a website that complements the store (27%). Burlington Coat Factory and T.J.Maxx ranked first and second for value, while Ross and Walmart rated highest for low prices. Dress Barn led for merchandise selection and also received high marks for having friendly and knowledgeable associates. Kohl’s was the winner in the loyalty program category, although no one chain seemed to really stand out in this area. See Graph 2.

“While we often see retailers get caught up in price wars, believing the best deals will win consumers’ hearts and minds, our research shows us this isn’t necessarily the case,” said Janet Eden-Harris, chief marketing officer for Market Force. “In fact, as we see with strong performers like Nordstrom and Kohl’s, it’s service-oriented factors like generous return policies and friendly associates that breed customer satisfaction and loyalty.”

Casual Wear
Market Force also looked specifically at the casual clothing sector to determine which retailers consumers visit most for their casual wear. Kohl’s was the leader by a large margin, followed by Macy’s and Walmart. See Graph 3.

Business Wear
Kohl’s is also the most popular place for consumers looking for business apparel. It earned the No. 1 ranking in this category as well, followed by Macy’s, JCPenney and Walmart. See Graph 4.

Shoes
In the shoes category, Market Force found that DSW was the run-away favorite, with Kohl’s and Payless ShoeSource rounding out the top three. See Graph 7.

Survey Demographics
The survey was conducted in October 2013 across the United States and Canada. The pool of 6,821 respondents reflected a broad spectrum of income levels, with nearly 60% reporting household incomes of more than $50,000 a year. Respondents’ ages ranged from 19 to over 65. Approximately 77% were women and 23% were men, and 42% have children at home.

Graph 2 - Top Fashion Retail Chains Ranked by AttributesIn response to question, "Why is this chain your favorite retailer?"

Graph 3 - Most Popular Retail Chain for Casual ClothingIn response to question, "In the past 90 days, which retailer did you visit to purchase casual clothing or accessories for yourself?"

Graph 4 - Most Popular Retail Chain for Business ClothingIn response to question, "In the past 90 days, which retailer did you visit to purchase business clothing or accessories for yourself?"

Graph 5 - Most Popular Retail Chain for Sports ApparelIn response to question, "In the past 90 days, which retailer did you visit to purchase sports clothing or accessories for yourself?"

Graph 6 - Most Popular Retail Chain for Children's ClothingIn response to question, "In the past 90 days, which retailer did you visit to purchase children's clothing or accessories?"

Graph 7 - Most Popular Retail Chain for ShoesIn response to question, "In the past 90 days, which retailer did you visit to purchase shoes?"