A national initiative known as “House America” will spend billions to ease the nation’s homeless crisis. The push has drawn praise from developers like Nick Saifan, Chairman of Vendaval Corp., who says a new approach, one that reduces red tape and provides cooperation with builders, governments, and nonprofits, is needed to accomplish the program’s aggressive goals. 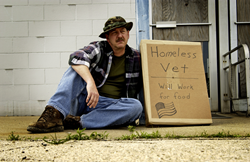 Although the exact number cannot be ascertained, according to the 2020 Census, there are 580,466 homeless people in the U.S.--more than 40,000 of them are veterans.

The best way to ensure the success of House America is for the government to take the back seat and let builders build. Plus, help with expedited permits and navigating the bureaucracy would be a great boost.

A White House-backed initiative called “House America” aims to ease the nation’s growing homeless crisis by getting cities, counties, and states to reduce homelessness in exchange for federal support and resources. Billed as “an all-hands-on-deck effort” to address the nation’s homelessness crisis, the campaign plans to rehouse at least 100,000 people and add at least 20,000 affordable housing units across the nation.(1)

In March, the Dept. of Housing and Urban Development (HUD) released a report that found more than 580,000 people experienced homelessness in the United States on a single night in January of 2020.(2) The crisis is acute in California, which saw an increase of 7 percent to its homeless population, ahead of the pandemic. Federal data indicates there are more than 161,000 homeless people in California.(3)

The plan has drawn praise from homeless advocates, but experienced housing developers like Nick Saifan of Vendaval Corp. warn that better cooperation among governments, builders, and nonprofit groups must be employed to avoid bureaucratic hurdles that have stalled similar efforts in the past, such as overregulation and restrictions.

“This should have been done long ago,” Saifan says of the new plan. “The best way to ensure the success of House America is for the government to take the back seat and let builders build. Plus, help with expedited permits and navigating the bureaucracy would be a great boost.”

The plan calls on state, tribal, and local leaders to partner with HUD to use American Rescue Plan funding as well as other resources to re-house individuals experiencing homelessness.(4) It also seeks to have new units of affordable housing, including new permanent supportive housing units, added to the development pipeline by no later than December 31, 2022.

In California, the state has committed an unprecedented $22 billion investment for housing and homelessness as part of the My California Comeback Plan, which includes additional funding from the American Rescue Plan. California will build more than 84,000 new affordable homes for Californians, including 44,000 new housing units and treatment beds for people exiting homelessness. California will account for one-third of the housing created as part of House America’s initiative to re-house at least 100,000 households experiencing homelessness.(5)

The City of Boston has pledged to join the “House America” fight and rehouse 1,100 households and create 650 units for those facing homelessness.(6) Other leaders joining the plan are the mayors of Austin, Oakland, Seattle, and Washington, D.C., as well as Cherokee Nation Principal Chief Chuck Hoskin, Jr., and the governors of California and Maine. Both Los Angeles Mayor Eric Garcetti and Los Angeles County Supervisor Holly Mitchell are among the first communities to pledge support for the plan.(7)

Saifan, a community development expert, who has spent decades advocating for homeless vets, worries that if this plan is carried out “as it always has been,” there could be unnecessary delays and many obstacles.

“We cannot approach these projects by following the same channels and old methods. The world has changed and so must developers, government officials, and agencies. The old ways of doing business don’t properly allocate funds. If you were promised $30 million from the government, the developer would only see about a third of it because another third would go to fight greenhouse gases, and the last third would go to nonprofits, transportation, and other services. We need a new model where 100% of the money goes where it’s supposed to go—to end homelessness.”

Saifan recommends stronger links between governments, developers, and nonprofits that can provide not just homes but education, job training, and mental health assistance to the homeless population. In addition, vetting experts will be needed to assure the funds help those in need, not those seeking to take advantage of the system.

Many experienced hands will be needed to help break the cycle of homelessness that has gripped much of the nation, Saifan observes. Ending the cycle will require more than a roof over a family’s head. It calls for nonprofit action to help homeless families with jobs, education, and afterschool activities. Saifan knows government officials have their hearts in the right place. He hopes all parties work together and not fall into the old trap of endless red tape, bureaucracy, and bickering.

“Millions of people in the United States need quality, affordable homes,” Saifan said. “This national push is a great start, but the parties involved must work together for those who need the most help. Allow developers to build. Get red tape out of the equation.”

About Vendaval Corporation
Nick Saifan served in the U.S. military for 24 years, including time stationed in Riverside County, CA. He experienced firsthand the difficulties of transitioning from military life to civilian life and, as a co-founder of a community-based nonprofit, he watched the difficulty in getting donations increasing year by year. Today, he’s putting his business savvy where his heart is. He sees a community that, like many, has struggled to evolve with a changing employment picture in the region. Today Vendaval Corporation visualizes a sustainable business structure creating the opportunity for helping those in need with successful community-based programs. The differentiator in the communities he visualizes is self-sufficient affordable housing in a mixed-use development that offers on-site programs for veterans, youth, education, childcare, on-the-job training, and job placement. These programs begin even before ground is broken. Rounding out the community are retail outlets such as bakeries/coffee shops, dry cleaning shops, a paid-membership fitness center, and financial institution. For more information visit http://www.vendavalcorp.com/