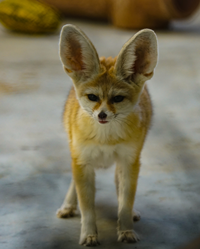 Summer, six-year-old female Fennec Fox, who was surrendered to Oakland Zoo and is temporarily living at the Oakland Zoo Veterinary Hospital

Very few facilities can care for a wild animal that has been raised by people, and they often don’t bond to people who didn’t raise them,

A six-year-old female Fennec fox, Summer (named previously by her past owner), was recently surrendered to Oakland Zoo, where she is temporarily living at the Veterinary Hospital, while the Zoo finds her a suitable home. She, like many other animals within the exotic pet trade, is acquired by uninformed owners that aren’t fully aware of the social, nutritional, and specialty care needed to maintain these wild animals. The impulsive decisions of buying an exotic pet can lead to the owner being unable to care for the animal over time adequately.

Seeing exotic animals in the wild or on social media, from U.S traveler blogs and social media posts, has inspired many to wish for a unique animal as a pet. Nevertheless, the lack of education behind the acquisition of these animals’ harms not only wildlife but the general well-being of the animal acquired. The general public is unaware of the amount of maintenance, care, and expertise it takes to care for these animals.

“Very few facilities can care for a wild animal that has been raised by people, and they often don’t bond to people who didn’t raise them,” says Colleen Kinzley, Director of Animal Care at Oakland Zoo.

Summer has adjusted well to living at the Oakland Zoo Veterinary Hospital. Keepers report that, though she is a very picky eater – her favorite treat is baked chicken. Summer came to the Zoo with a lower weight than desired. The Veterinary Staff has followed the Species Survival Plan (SSP) standards for Fennec fox diets to get Summer to a healthier weight for her species. SSP oversees the population breeding plans of select species within the Association of Zoos and Aquariums (AZA) member institutions and to enhance the conservation of this species in the wild.

“Along with the SSP diet standards, we ran many routine medical exams, including radiographs and bloodwork. Our goal is to provide the same compassionate, state of the art medical care that the Oakland Zoo animals receive, to any rescue animal that comes to the Zoo, “says Dr. Alex Herman, Director of Veterinary Services at Oakland Zoo.

Oakland Zoo is no stranger to taking care of rescues from the wild or private ownership. The Zoo is and has in the past been home to gibbons, lions, tigers and many other animals who have had ties to the multi-billion dollar exotic pet trade. California Fish and Wildlife Service (CSFWS) safeguards wild mammals by implementing laws that make it illegal for most exotic animals to become pets. In the U.S, some states have lax laws when it comes to pet ownership, which allows many animals to be taken from the wild and put into living situations that are not suitable for their well-being.

ABOUT OAKLAND ZOO AND THE CONSERVATION SOCIETY OF CALIFORNIA:
Oakland Zoo, home to more than 750 native and exotic animals, is managed by the Conservation Society of California (CSC); a non-profit organization leading an informed and inspired community to take action for wildlife locally and globally. With over 25 conservation partners and projects worldwide, the CSC is committed to conservation-based education and saving species and their habitats in the wild. Oakland Zoo is dedicated to the humane treatment of animals and is accredited by the Association of Zoos and Aquariums (AZA), the national organization that sets the highest standards for animal welfare for zoos and aquariums.
‍