Fernando G. Ting’s newly released “The Kingdom I Came to Love” is a magnificent account that shows to readers the beauty of the Kingdom of Saudi Arabia and its workers

“The Kingdom I Came to Love” from Christian Faith Publishing author Fernando G. Ting is an enthralling tome that unleashes the beauty of a kingdom that once experienced a windfall and then became one of the world’s most progressive countries due to the help of multi-talented and heroic workers who executed the country’s dream into a reality. 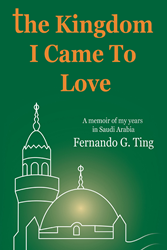 Ting writes, “The safest way to view the Middle East in general and the Kingdom of Saudi Arabia, in particular, is from an airplane window during a landing approach. Once out of the plane, you no longer have the confines of the cockpit to isolate your senses. Depending on the weather and time of the year, you immediately feel the searing heat on your skin, the blinding glare of the sun reflected from the ground hits your eyes, and the sweetish smell of petroleum permeating in the air greets your nose. But as soon as you overcome the initial shocks, you will begin to feast on the opulent sights in the modern miracle in the desert. Millions of international brains and brawn labored many years to build, develop, and maintain the multimillion-dollar modern structures and facilities in Saudi Arabia. When the Kingdom came into the windfall of petroleum dollars, its tiny population can never cope with the vast modernization plan of the government calling for super large building projects. The only solution is to import millions of brilliant minds and muscles to execute magnificent dreams into reality. The ultra-religious Kingdom has always maintained a preference for fellow Muslims like Egypt, Sudan, Syria, Pakistan, Yemen, Somalia, Indonesia, and Bangladesh but also graciously opened its doors to hardworking non-Muslims. Workers from Europe, the USA, South Korea, Thailand, the Philippines, India, Japan, and China flooded the country. The multinational talents are a huge blessing to the Kingdom, spurring its development into dizzying heights. The whole situation has also developed into a mutually beneficial activity because the Kingdom has ultimately provided precious income to the millions of its workers. It has shared its blessings. This book is only a microcosm of the much larger picture of the Kingdom of Saudi Arabia and its heroic workers!”

Published by Christian Faith Publishing, Fernando G. Ting’s new book serves as a historical legacy to readers as the author shows a spectacular leap of a country with brilliant and mighty people.

View a synopsis of “The Kingdom I Came to Love” on YouTube.

Consumers can purchase “The Kingdom I Came to Love” at traditional brick & mortar bookstores, or online at Amazon.com, Apple iTunes store, or Barnes and Noble.

For additional information or inquiries about “The Kingdom I Came to Love,” contact the Christian Faith Publishing media department at 866-554-0919.