Festo Showcases the Industry 4.0 Capabilities of its VTEM Motion Terminal at IMTS 2018 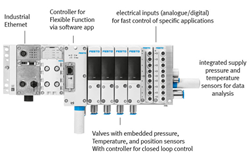 The VTEM Motion Terminal conforms to the National Science Foundation’s definition of CPS as an engineered system that is built from, and depends upon, the seamless integration of computational algorithms and physical components. The foundation envisions that, “Advances in CPS will enable capability, adaptability, scalability, resiliency, safety, security, and usability that will far exceed the simple embedded systems of today. CPS technology will transform the way people interact with engineered systems – just as the Internet has transformed the way people interact with information. New smart CPS will drive innovation and competition in sectors such as agriculture, energy, transportation, building design and automation, healthcare, and manufacturing.”

Easier engineering with standardized platform concepts
With a single intelligent valve slice potentially providing the functionality of up to 50 individual components, a CPS such as the VTEM Motion Terminal opens the door to standardized platform concepts for systems and system modules. Standardization considerably reduces hardware costs all along the supply chain as the number of different components that the machine builder or end user must specify and stock as spare parts is lower. For example, valve variety is reduced to one and pressure sensors and flow controls are integrated. By focusing on a flexible CPS platform right from the start, even the planning stage, the search for suitable products and suppliers can be shortened.

Getting up and running quickly
Design is one of the biggest costs in machine and system building, accounting for approximately 25 to 30 percent of total cost. A CPS such as the VTEM Motion Terminal enables significant time gains and savings compared with a conventional valve terminal platform. In some cases, the time saved compared with designing and parameterizing a modular valve terminal and additional individual components is up to 70 percent. While a solution with modular valve terminals requires several individual steps, a solution with CPS moves the organization to its goal faster.

The adaptations are implemented digitally on the product itself, so there is no need to physically reconfigure the valve terminal, download and create the CAD model, or adapt the hole pattern and assembly drawing, including a parts list. Designers will find the creation of electrical circuit diagrams, the documentation including spare and wearing parts lists, and the approval process speeded up.

Lower costs for data management, logistics, and warehousing
With many fewer components, a CPS minimizes the process steps required for logistics and warehousing and reduces the cost of data management and maintenance. OEMs and end users integrate new functions simply by purchasing the relevant motion app licenses.

Greater reliability and reduced effort due to standardization
Reducing system complexity is becoming more and more important given that human error is increasingly being identified as the cause of system failures. Solutions with intelligent function integration and fewer interfaces are therefore ideal for achieving maximum efficiency. This reduces assembly work as well as possible errors and any queries that may arise. Having just one standardized component optimizes process sequences for a wide range of functions.

Easier replication of pneumatic systems
Coordinating individual process steps, such as setting the travel speeds of cylinders, is often a time-intensive process in conventional mechatronic systems. CPS solutions generally do not involve complex manual setting processes for components that may sometimes be hard to reach, and they are also self-regulating and self-optimizing in terms of energy consumption. These are clear benefits for machine builders. The travel speed of each individual cylinder can be defined with just a few clicks via the app’s parameter records; this also rules out tampering. The app saves between three and four minutes of setting time per flow control valve. Looking at the annual production of a series machine builder, the cumulative time savings can be substantial. Another big advantage is that all system configurations are completely identical.

Configuration and parameterization of complex solutions
Parameterization should be as fast as possible. Up until now, if a design engineer wanted to precisely and quickly control the pressure to compensate for a pressure drop caused by friction in the compressed air line, he or she needed to determine the parameters empirically, i.e. a higher setpoint value and the time that the pressure stays at this value before it drops back down again to the target value. Using the sensor intelligence and software modules in cyber-physical systems, these tasks are unnecessary. The Festo Motion Terminal has a model-based proportional pressure regulation app for this process. The app can also actively and autonomously respond to changing parameters, such as fluctuations in input pressure.

Shorter setup times and adjustment at the touch of a button
Format changeovers usually involve changing components such as grippers. This in turn requires adapting pressures or flow rates and travel speeds or entire functions. The VTEM Motion Terminal eliminates many manual procedures – and sources of error. Reconfiguration and adjustments are done via the app or automatically via the PLC, which means that the performance and/or processes of all machines during format changes or in series machines can be improved at the touch of a button.

In terms of their basic structure, CPSs are mechatronic systems. In addition, they also have integrated smart sensors and greater software intelligence. One important application for a CPS is to determine external conditions – for example, compressed air leakage – without the need for additional sensors, and then share this information with other systems.
For more information, call 800-993-3786 and/or visit https://www.festo.us.

About Festo
Festo is a leading manufacturer of pneumatic and electromechanical systems, components, and controls for process and industrial automation. For more than 40 years, Festo Corporation has continuously elevated the state of manufacturing with innovations and optimized motion control solutions that deliver higher performing, more profitable automated manufacturing and processing equipment.