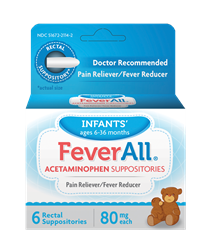 FeverAll 80 mg Infants' Strength - the only acetaminophen labeled for infants as young as 6 months of age.

The FeverAll® brand has been growing steadily, gaining new distribution at several retailers, including Publix and Target, and thriving at longstanding retailers.

FeverAll®, the #1 doctor and Mommy MD Guides recommended brand of acetaminophen suppositories for children as young as six months of age, has expanded its distribution to Publix. The FeverAll Infants’ Strength (80 mg of acetaminophen) for the temporary reduction of fever, pain and headaches, is available just in time for this cold and flu season, which is proving to be severe.

“Despite the range of severity of the cold/flu seasons the last several years, the FeverAll brand has been growing steadily, gaining new distribution at several retailers, including Publix and Target, and thriving at longstanding retailers,” says Phil Tucker, director of OTC sales at Taro Pharmaceuticals U.S.A., Inc. “We believe this is due to the fact that we have been raising awareness of some of FeverAll’s unique qualities, such as the measured dosing and our ‘pure medicine’ formula free of parabens, dyes and sugars often found in oral liquid medications.”

A survey conducted by Taro USA of more than 400 pediatric nurse practitioners (PNPs) at the annual National Association of Pediatric Nurse Practitioners (NAPNAP) conference in March 2019, found that more than 3/4s of PNPs have patients looking for products with less inactive ingredients and premeasured dosing.

“FeverAll suppositories have the fewest inactive ingredients than the leading acetaminophen oral liquid brand,*” explains Tucker. “FeverAll has no high fructose corn syrup, parabens, artificial colors and preservatives or alcohol – all ingredients that are concerning to parents and healthcare providers, and unnecessary for children.”

To learn more information about FeverAll® Acetaminophen Suppositories and see the list of retailers, visit http://www.feverall.com.

About Taro Pharmaceutical Industries Ltd.
Taro was founded in 1988 and is based in Hawthorne, New York. Taro Pharmaceuticals U.S.A., Inc. operates as a subsidiary of Taro Pharmaceutical Industries Ltd. Taro is a research-based international pharmaceutical company that was established on the principal that research and development would be the cornerstone of its growth strategy. Providing quality products through scientific innovations, diligence and precision is the goal of all of Taro's research programs. Taro develops high-quality, proprietary and off-patent pharmaceuticals for markets in the US, Canada, Israel and other countries around the world. The Company produces a wide range of prescription and over-the counter products including FeverAll® Acetaminophen Suppositories, tablets, capsules, suspensions, solutions, creams, and ointments.