Fictional Novel Explores the Potential of U.S. War With China 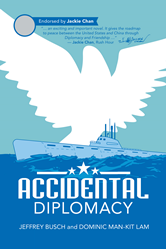 “Through our work with past presidents and foreign policy, we both understand that diplomacy is key,” Busch said. “Without it, a third world war is certainly imminent.”

The United States and China face war after a computer error causes a battle in the new book by Jeffrey Busch and Dominic Man-Kit Lam.

In “Accidental Diplomacy,” readers get a glimpse of the importance of diplomacy, even when political strength is warranted. Through detailed accounts of political protocol and military responsibilities, readers get a first-hand look at the complexity of international relations in the modern-day world. The authors hope to convey that hypothetical accidents and poor diplomacy could lead to World War III.

Before becoming an author, Busch served in the administrations of two U.S. presidents, and was a delegate to the United Nations. Dr. Lam has been an advisor to several Chinese presidents.

“Through our work with past presidents and foreign policy, we both understand that diplomacy is key,” Busch said. “Without it, a third world war is certainly imminent.”

As readers follow the discussions between U.S. Secretary of State, Bill Bryers, and China’s Foreign Minister, Yao Sheng, diplomacy takes the stage, even as both men battle against a need to show the other their country’s power.

Tensions grow while military pressure increases between two superpowers, each striving to be the victor. The typical response, to engage in war, weighs heavily on both men as they remember their roots and reflect on the duty they vowed to uphold.

About the author
Jeffrey Busch is a graduate of New York University. Busch previously served in the administrations of two United States presidents. He also served as United States Delegate to the United Nations, in Geneva, Switzerland.

Dr. Dominic Lam was a highly distinguished professor at Harvard University and has been an advisor to several Chinese presidents.