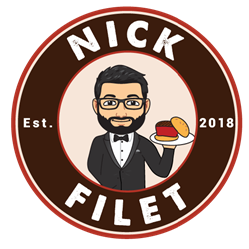 “We’re making one of the most luxurious steaks on earth accessible to everyone in a fun and delicious way. I’m excited to share Nick Filet with my hometown and hope to open more locations in the future.”

Nick Filet, the first-ever filet mignon sandwich restaurant, announced that its third location will open in suburban Philadelphia this December. This new store in Wayne, the company’s first franchise location, will be located at 313 E. Lancaster Avenue in the Wayne Square Shopping Center.

Nick Filet is a fast-casual restaurant specializing in affordable, steakhouse quality meals for lunch and dinner. Known for its $8.99 cooked-to-order filet mignon sandwich on a toasted Amoroso Kaiser roll, the concept offers a high-end alternative to burger joints and cheesesteak shops. Nick Filet’s tender filet mignon sandwiches can be built to order with melted cheese and free toppings, including steak sauce, horseradish, mushrooms, and onions.

Philadelphia Magazine named Nick Filet a “Best of Philly 2020” winner for its $16.99 filet mignon and lobster Surf & Turf Sandwich. Many customers go for the concept’s signature sandwiches, such as the Nickadelphia which comes topped with provolone cheese, onions, and horseradish. Popular menu items also include a filet grilled cheese, bun-free filet bites, and parmesan truffle fries.

Franchise owner Brandon Howell was one of Nick Filet’s first employees and served as COO and General Manager until deciding to become the company’s first franchisee. Howell brings a broad base of experience in marketing, new store design, website development, sales, customer service, and management to this new store. A jack-of-all-trades, the Radnor High School grad is versed in both front and back of house responsibilities as well as hiring, training, and administrative functions – everything it takes to be successful in the restaurant business.

“I’ve been passionate about this concept since day one,” said Brandon Howell, owner of the Wayne location. “We’re making one of the most luxurious steaks on earth accessible to everyone in a fun and delicious way. I’m excited to share Nick Filet with my hometown and hope to open more locations in the future.”

When Nick Filet’s co-founders Nick and Keith Kline of Malvern cooked their first filet mignon sandwich on a backyard grill in 2018, they knew they had created something special. Within months, the father and son team had opened the first Nick Filet in Paoli, Pennsylvania and quickly followed it up with a second location in Cape May, New Jersey. They announced in May 2020 that they would begin franchising in Pennsylvania and surrounding states.

“Brandon has worked hard every day for two years straight to make Nick Filet a success,” said co-founder and CEO Nick Kline. “He’s passionate, talented, and dedicated. I’m thrilled to see his hard work pay off with the opening of his own store. As we continue to grow, nothing would make me happier than if he ended up becoming our biggest franchisee.”

The Wayne location will be open seven days a week, 11 a.m. to 9 p.m. For more information, visit https://www.nickfilet.com/

About Nick Filet
Nick Filet is the first-ever filet mignon sandwich restaurant. With the tagline “Filet For All,” the concept serves high-quality, affordable filet mignon on sandwiches, on salads, in cheddar mac & cheese, and more. Nick Filet has one location in Paoli, Pennsylvania, one in Cape May, New Jersey, and recently announced that it would begin franchising in Pennsylvania and surrounding states, with the goal of eventually expanding nationwide. The first franchise location will open in December 2020.