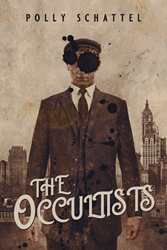 The cover for The Occultists, by Polly Schattel

Polly Schattel, an independent filmmaker based in Western North Carolina, recently released her first novel, called The Occultists, a dark fantasy based in Edwardian spiritualism and a lifetime of reading horror masters like Peter Straub and Joyce Carol Oates, and literary thrillers like those of Caleb Carr, Michael Chabon and Donna Tartt. Originally conceived as an eight episode limited series for TV, the dual nature of the project—both thrilling and character-based, historical and modern—proved difficult to capture in the filmmaker’s typically low-budget cinematic context. So she turned to the written word.

The Occultists follows an Edwardian-era teen, Max Grahame, as he discovers and is accepted into a secretive spiritualist cabal. But when he learns of their powerful and terrifying techniques of manipulating reality to suit their needs, his suspicions grow that all is not as it should be. This leads to a dangerous, supernatural cat and mouse chase that takes him from the mountains of rural Appalachia to the mystical plains of the midwest, from fin de siecle Manhattan to the Elsewhere.

“I’ve been fascinated by the Edwardian era—the age of opulence, the Titanic, the seances, the spiffy tuxes and elaborate gowns—for years. Despite the bounty of other projects set in that time, it still felt a little like undiscovered territory, in the sense that mediums and spiritualists and stage illusionists were ripe for exploration from a modern horror point of view.”

At first, Schattel looked to the writers closer to the period, like Algernon Blackwood and Arthur Conan Doyle, to find the right tone. “For about a year, I worked as if the book was written back then. The language was more obtuse, the sentences longer and convoluted and somewhat abstracted. But then I realized that the book would work better if it had a more accessible point of view—a shorter, punchier approach to the language, a more immediate perspective that was equal parts YA and literary.”

The book was published in late July 2020 by JournalStone, the respected small press that released Sarah Read’s Stoker Award-winning debut novel, The Bone Weaver’s Orchard, last year. “The other writers JournalStone publishes—S.P. Miskowski, Gemma Files, John Horner Jacobs, Emma Jane Gibbon—are these incredible artists who push the boundaries of the form. So I was surprised and delighted to find myself, in all my authorial naïveté, in their company.”

For her part, Schattel has gotten used to writing fiction, and doesn’t see any reason to stop now. “I was frustrated by the film industry. I’d had some small successes, but mainly my projects had delays and setbacks and endless budgetary limitations. I continually bumped up against the guard rails of what seemed possible for the budgets I had access to. But with a novel, there’s nothing you can imagine that can’t be realized. There’s no budget at all—it’s just you and your own raw creativity.”

And, Schattel admits, there’s another reason she likes the writing life. “Filmmakers work unbelievably hard. They get up crazy early and find themselves on set at 7AM, and routinely work 12 hour days, six days a week. As wonderful as the people are, as thrilling the camaraderie is, it can be physically and emotionally draining. But writing books, I get to write for four or five hours with a cup of coffee close at hand, and then go for a meandering hike with my dogs. In my old age, I’m getting lazy. It suits me.”

The Occultists can be found at indie bookstores near you, and wherever good books are sold.