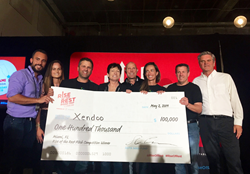 By pairing human and machine, we’re changing the relationship people have with their accounting

Lil Roberts, Founder and CEO of Xendoo, a South Florida-based tech company, has won Revolution’s Rise of the Rest pitch competition in Miami, FL and has received a $100,000 investment, joining Revolution’s Rise of the Rest Seed Fund. As one of eight finalists out of 540 Florida applicants, Roberts is “thrilled to represent South Florida and women-led tech companies.”

Xendoo is no stranger to the winning stage, and won eMerge America’s 2018 startup showcase, which earned the company a $100,000 investment from Silicon Valley’s Launch Incubator.

Rise of the Rest is a nationwide effort powered by Revolution to invest in and work closely with entrepreneurs in emerging startup ecosystems. Since 2014, Steve Case and the Revolution team have logged more than 11,500 miles touring entrepreneurial communities by bus in 43 cities. In 2017, Case and JD Vance announced the $150 million Revolution Rise of the Rest Seed Fund, backed by a group of iconic entrepreneurs, executives and investors that believe the next great startup investments are outside of traditional tech hubs like Silicon Valley and New York City. Last year, over 75 percent of all venture capital investments in the U.S. went to California, New York and Massachusetts. Florida, the third most-populous state, only accounted for under 2% of venture funding.

During the final segment of the Rise of the Rest Road trip, Roberts took to the stage and pitched Xendoo to all-star judges including AOL co-founder Steve Case, Chewy.com founder Ryan Cohen, BET co-founder Sheila Johnson and other esteemed tech and business leaders.

Lil Roberts accepted the $100,000 investment with an “attitude of gratitude” and thanked her team and the eMerge Americas’ family for their support throughout Xendoo’s journey. By pairing “human and machine, we’re changing the relationship people have with getting their accounting done. We’re helping small businesses succeed,” added Roberts.

The company’s technology delivers financial peace of mind to the underserved small business community by giving them timely visibility into their financial health.

“We are extremely grateful to Steve and Revolution, and the Rise of the Rest Road Trip for putting South Florida on the tech map.” Roberts says. “We are thankful, and excited for the journey ahead.”