The veteran-owned business founded by two firefighters showcases its coffee and mental health initiative to the show's judges, making its case for a winning combination. 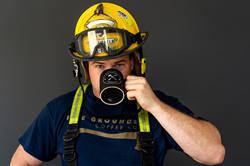 “We’re so pleased by the initial response to our brand,” said Clarke. “A day doesn’t go by without us dedicating our time to increase awareness about our partnership with Next Rung since mental health is a huge issue amongst first responders.”

Fire Grounds Coffee Co.’s upcoming appearance on Fox’s new investment TV show, America’s Real Deal, is generating buzz for what is proving to be a caffeinated jolt of excitement for the ambitious startup, which real-life heroes founded.

The program allows viewers to vote, buy products and invest in 12 small businesses, determining who will be the season one champion. Viewers are encouraged to share the story of their favorite business on their social media channels with the link here.

The veteran-owned startup founded by firefighters Paul Clarke and Kyle Lund made its case before the judges on why their premium brew does more than supply premium coffee to stations and coffee lovers nationwide. It also focuses on providing necessary mental health resources to first responders, often suffering from PTSD and other emotional issues, making a difference in the lives of thousands with each cup of coffee.

Hear what the panel had to say in this advanced clip from the show - https://youtu.be/TryfmHihK50.

For every five bags of specialty coffee sold, Fire Grounds Coffee donates one bag to a first responder. The sale of the premium, 100% Colombian air-roasted coffee also provides firefighters access to mental health resources through Next Rung.

“We’re so pleased by the initial response to our brand and feel audiences will jump on board as well once they learn more about the many ways we give back to our communities,” said Clarke. “A day doesn’t go by without us dedicating our time to increase awareness about our partnership with Next Rung since mental health is a huge issue amongst first responders with alcoholism, drug use and suicide rampant amongst our fellow firefighters.”

The brand originated when Clarke was on an early morning ride with sirens blaring, craving a great cup of coffee, not the substandard version in his firehouse. He let that idea germinate while being subsequently deployed to Iraq as a Marine officer for nine months. Upon his return, met with fellow firefighter and veteran buddy Lund to start the brand.

The full premiere episode of America’s Real Deal can be seen here.

About Fire Grounds Coffee Co.:
Fire Grounds Coffee Co. is built on the belief that heroes deserve the best quality coffee. The company was founded by two U.S. veterans who now serve as firefighters and paramedics in the Dallas area and are all about putting first responders – first. For every five bags of specialty coffee sold, one bag is donated to a first responder as a thank you to this valuable group of men and women whose heroism and commitment to serving and protecting our communities do not go unnoticed. As for the coffee itself, what sets Fire Grounds apart from other premium craft coffee is that our coffee is air roasted on demand, per order, which means you get only the freshest brew possible with every cup.

Vote, Buy, or Invest!The program allows viewers to vote, buy products and invest in 12 small businesses, determining who will be the season one champion.