According to Adams Arms, their consumer roster of Black American gun owners has seen dramatic growth in the last two years; with Second Amendment rights, personal protection, and proficiency at the core of their decision. Nationwide people of color are shifting the narrative of gun rights and changing the image of firearms ownership in the U.S. 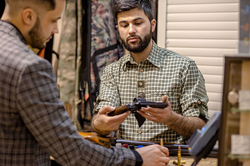 In 2020, 40 percent of gun buyers were first time firearms owners, according to the National Shooting Sports Foundation – and the demographic with the greatest increases are women and people of color.

Members of Tampa Bay’s Black Gun Owners and Education group say they are drawn to firearms for sport, protection and stress relief. The sense of community encourages them to compare notes while preparing for competitions – and for the feeling of security.

The National African American Gun Association (NAAGA) has seen dramatic growth upwards from 58 percent in 2021, with new gun owners shattering the worn-out stereotypes of older white men. Overall, in 2020, 40 percent of gun buyers were first time firearms owners, according to the National Shooting Sports Foundation (NSSF) – and the demographic with the greatest increases are women and people of color, each younger.(1) Adams Arms President Jason East has followed as diversity has changed the face of gun ownership. “They have studied and have an appreciation for the Second Amendment, have a desire for technology and precision training in personal protection and safety standards. They are America” points out East.

One shift in the firearms industry is the rise in interest of competition shooting among people of color. When they recognize they have a skill they train harder and enjoy the feeling of accomplishment and challenge. Members of Tampa Bay’s Black Gun Owners and Education group say they are drawn to firearms for sport, protection and stress relief. The sense of community encourages them to compare notes while preparing for competitions – and for the feeling of security.(2)

The NSSF reported that the increase in 2020 was the highest bump in gun sales of any ethnic group that year, occurring after the murder of George Floyd and sparking a nationwide social justice movement. A number of the first time black American gun owners state a heightened fear of being targeted in racial attacks, as those in Buffalo or Charleston, SC. NAAGA’s founder, Philip Smith, calls the increased gun ownership an awakening, a move in a good direction.(3)

East adds, “As American gun rights activist, lawyer and web series host/influencer Colion Noir maintains that the country has been conditioned to believe the only good people with guns are hunters, law enforcement and the military.” He recognizes that Noir works to erase the stigma of black gun owners as gangsters, being a young black attorney who grew up in the city and is an advocate of the Second Amendment. He is changing the narrative of responsible gun owners in the U.S. who are fighting for the right of people to own guns.(4) “At Adams Arms we understand his passion for wanting to change the image of gun owners, using his education and personal experiences to drive the conversation” says East.

“Our piston system, historically a favorite of the military and law enforcement, is seen for its merit by some of the newest first-time gun owners, who are concerned with personal safety and legal self-defense, which require reliability and proficiency with a firearm. Training and education demonstrate that the rifle is cleaner, cooler and more reliable. In short, [Adams Arms’] operation is there when it counts the most, which helps gun owners feel in control” points out East.