Over 90,000 Police Officers Saved from Poisoning

Police officers are committed to “protect and serve,” but who is protecting them? MT2 leads battle against lead poisoning to protect law enforcement officers nationwide. 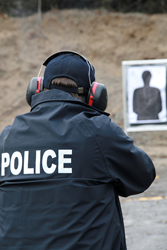 I am very satisfied in the quality of work performed by MT2’s experience staff. They conducted their work in a very professional manner, meeting and exceeding CTA’s expectations.Jerry R JunipeOH DOC Corrections Training Academy

According to the Census of State and Local Law Enforcement Agencies (CSLLEA) and the Law Enforcement Management and Administrative Statistics (LEMAS) survey, local police departments had about 461,000 sworn officers. (2008 Bureau of Justice Statistics (BJS) - Local Police http://www.bjs.gov/index.cfm?ty=tp&tid=71) Each of these officers train at shooting ranges, which places those officers at risk for lead poisoning, according to the October 2014 Seattle Times Investigative Report “Loaded with Lead: How Gun Ranges Poison Workers and Shooters.” (Read the full report at http://projects.seattletimes.com/2014/loaded-with-lead/1)

Fortunately, a Colorado-based company, MT2, LLC, is leading the fight to protect police officers and other shooters from the hazards of lead poisoning at gun ranges. In the past year alone, MT2 has completed firing range clean-ups for law enforcement agencies such as NYPD, Denver, Seattle, and North Las Vegas; combined over 90,000 police officers train at these ranges annually. Over the past decade, MT2 has removed over 11,000,000 lbs of lead from the environment while working closely with range owners to implement firing range Best Management Practices (BMPs) to protect shooters and the environment. “We are proud to serve and protect those in law enforcement and the military that serve and protect us,” stated James Barthel, MT2 CEO.

“Dirty gun ranges are a source of toxic lead poisoning throughout Washington State and the rest of the country. Employees at gun ranges, as well as their families, are typically the most at risk for lead poisoning, which can cause a range of health problems,” the Times reported. “Lead exposure can cause an array of health problems from nausea and fatigue to organ damage, mental impairment and even death.”

“Everyone knows that high velocity lead can be deadly, but the hidden danger of lead at firing ranges comes from the dust and fines generated by shooting activities. There are Best Management Practices for managing lead at firing ranges that both indoor and outdoor ranges can implement in order to protect shooters, workers, the environmental and the local community from lead hazards” stated James Barthel; “We are passionate about Gun Range lead cleanup and restoring our environment and protecting people from the hazards of lead. That is why MT2 has developed a free guide for range owners titled 10 Keys to Range Management and Control of Lead Hazards.”

MT2’s extensive list of clients includes over 200 law enforcement agencies such as NYPD, State Departments of Corrections, and the US Military. Since 2006, MT2 has been implementing a BMP Program for lead management and maintenance that successfully reduces lead hazards at the NYPD training range where over 40,000 officers and recruits train annually. The NYPD BMP Program includes removal and recycling of lead bullets and bullet fragments; sampling, analysis and monitoring of soil and groundwater conditions; and chemically converting potential leachable lead fines remaining in range soils utilizing MT2’s patented ECOBOND® lead treatment technologies so that treated soils are considered non-hazardous and can be replaced back onto range berms.

The summary findings below are based on the 2008 Census of State and Local Law Enforcement Agencies (CSLLEA) and the 2007 Law Enforcement Management and Administrative Statistics (LEMAS) survey. In 2008, local police departments had about 593,000 full-time employees, including 461,000 sworn officers.
Bureau of Justice Statistics (BJS) - Local Police
http://www.bjs.gov/index.cfm?ty=tp&tid=71