Former MLB player, coach and manager, acclaimed author and philanthropist at the helm 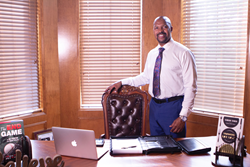 ...CORE Magazine will unwrap sport’s biggest stories and capitalize on award-winning professionals who’ve used their sphere of influence to elevate the world.

Bo Porter Enterprises today announced the approaching launch in October 2020 of its newest venture, CORE Magazine. The announcement was made by Marquis “Bo” Porter, founding president and chief executive officer.

CORE, an acronym for Champions Of Real Excellence, will premiere as a quarterly digital publication with print-on-demand capabilities and is expected to reach millions of growth-mindset readers. Its in-depth feature stories will cover business, sports, leadership, philanthropy and marketing to provide business insight, professional development, sports reporting and leadership advice from proven champions. Digital subscriptions, available at core-mag.com/product/magazine-subscription/, also will give access to newsletters and special report articles.

Unique sponsorships will unlock unprecedented engagement opportunities with the champions showcased in each issue, as well as inclusion in the online business directory and events calendar. Additionally, the magazine’s advertisement hub will provide readers with valuable subscriber-only cost-saving offers and rebates.

“CORE Magazine will transform and redefine the landscape of magazines by providing a well-rounded publication uniquely designed to reach a diverse national audience, from business owners and sports enthusiasts, to forward-thinking leaders aspiring growth and those engaged in the philanthropic platform,” said Porter. “Through inspirational stories emerging from transparent, authentic interviews with champions in sports, business, leadership, philanthropy and marketing, CORE Magazine will unwrap sport’s biggest stories and capitalize on award-winning professionals who’ve used their sphere of influence to elevate the world.”

Each issue will showcase five champions in distinct recurring features: Ball2Business – former athletes who have championed their career and transitioned to success in the business sector; ME2me – former athletes and business professionals providing inspiration by writing in upper-case ME to their younger lower-case me; Champions4Causes – champions in career and philanthropy; Champions Digest book club; and A.P.E.X. Awards – At the Pinnacle of EXcellence –nominees exemplifying the highest-quality in their respective fields by CORE Magazine standards and published annually in the second, third and fourth editions.

The premiere issue of CORE Magazine will feature interviews with Mike Rizzo, president and general manager of baseball operations with the Washington Nationals of Major League Baseball; B.J. Armstrong, winner of three NBA championships during his career as a point guard with the Chicago Bulls; Bob Kendrick, president of Negro Leagues Baseball Museum and creator of the museum’s recent Tipping Your Cap campaign associated with the 100th anniversary of the Negro League’s founding; Carlos Peña, former MLB first baseman, studio analyst with the Major League Baseball Network (MLB Network) and New England Sports Network, and spokesman for Big Brothers Big Sisters of America; James Rodney “J.R.” Richard, a former MLB starting pitcher, inductee in the inaugural class of the Houston Astros Hall of Fame and a dynamic force in helping establish baseball programs for children; and Jennifer Altman, office managing partner dedicated to sophisticated healthcare-related litigation at the Miami office of the law firm Pillsbury Winthrop Shaw Pittman LLP and selected in 2019 to the National Law Journal’s 2019 list of Winning Litigators for her big victories in the year’s highest-stakes cases. The launch issue of CORE Magazine also will feature an interview with Bo Porter, focusing on his highly sought signature leadership program, 21 Days of Transformational Leadership.

Beginning in October 2021, subscribers can vote on nominees for A.P.E.X. of the Year in the categories of sports, business and leadership. Winners will be announced at a by-invitation awards gala in December and featured in the following-year’s first quarter issue. This annual event will create a first-of-its-kind hall of fame for the nation’s top-tier champions.

Porter is founder and chairman of the board of Bo Porter Charities, through which he is a strong advocate of philanthropy and community engagement to improve and impact the lives of others through sports, education, life skills and faith. Building on his unwavering commitment to inspire and engage, 10 percent of CORE Magazine’s annual income is donated to non-profit organizations.

ABOUT BO PORTER
Bo Porter has more than 27 years of MLB experience as a player, coach, manager, front office executive and broadcast analyst. He is a proven leadership coach for high-profile executives and elite leaders in the sports industry. As a business development consultant, Bo provides tangible value by helping companies improve profit margins, and he’s a change agent for organizations looking to enhance, reboot or pivot their strategic plan. He understands the value of team building, the challenges facing athletes when they transition to life after sports and the value add of transformational leadership. Known as the “Coach of Champions,” Bo has coached, mentored, guided and influenced countless others to reach their full potential en route to championing their lives. Using his vast professional experiences, Bo has developed a holistic platform and become a force for all that is good. He’s the founding president and CEO of CORE Magazine, a digital and print-on-demand quarterly periodical reaching millions of growth mindset readers in business, sports, leadership, philanthropy and marketing. Aspiring leaders register for his Champions of Leadership Program to successfully navigate the ever-so-important world of sustainable excellence in business, and athletes at all levels utilize The END GAME Bridge to Excellence to prepare for life after sports. Bo also is a highly sought keynote speaker and author. Read his books, subscribe to his podcast and follow him on Linkedin, Twitter at @BoPorter16Bo, Facebook @OfficialBoPorter and Instagram @therealboporter.