As the pandemic increases the need for outdoor recreation, a new report from Restore Hetch Hetchy uncovers the long history of the National Park Service’s unmet commitments for visitor services at Hetch Hetchy, with recommendations to transform public access 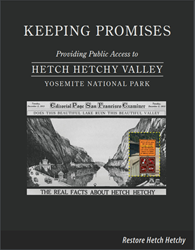 Visitor access and recreation in the Hetch Hetchy area of Yosemite National Park has been unduly restricted for the past century – contrary to the expectations of Congress when it allowed San Francisco to construct a reservoir and flood the valley floor, according to a new report released today by Restore Hetch Hetchy. In light of these findings, the report offers five principal recommendations for improving access for park visitors at Hetch Hetchy.

‘Keeping Promises: Providing Public Access to Hetch Hetchy Valley, Yosemite National Park,' is released coincident with the National Park Service’s “Transformation Tuesday” and as uncrowded outdoor recreation has become increasingly important as a result of the pandemic. The report details how the Raker Act of 1913, which allowed San Francisco to build a dam within Yosemite National Park, was conditioned on the premise that interference with park visitors would be expressly limited. While San Francisco has long received its benefits authorized by the legislation, visitor access has been restricted and the public has been shortchanged.

“The situation at Hetch Hetchy today is a far cry from what Congress intended when it passed the Raker Act,” said Spreck Rosekrans, Executive Director of Restore Hetch Hetchy. “Camping, lodging, boating and fishing are not available. There are few trails. The entrance gate is open only during limited daylight hours, so it’s the rare visitor who sees a sunrise or sunset at Hetch Hetchy. It’s no wonder Hetch Hetchy is the least-visited and most under-appreciated area of Yosemite and receives barely 1% of the park’s visitors.”

“Keeping Promises provides a detailed account of how San Francisco's use of Hetch Hetchy exclusively as a municipal water source has limited the American public's access.” said Sara Sutherland, a Lone Mountain Fellow at the Property and Environment Research Center and author of a policy brief on Hetch Hetchy: San Francisco Should Pay Yosemite the Dam Rent. “It raises important questions about whether the time is right to modernize the century-old arrangement between Yosemite and San Francisco.”

“There couldn’t be a more important time to find better ways to welcome visitors to Yosemite National Park,” added Rosekrans. “The Covid-19 pandemic has brought a surge in demand for safe access to our national parks. In addition, communities which have not traditionally felt welcome in places like Yosemite are now beginning to understand parks really are for everybody. There’s a tremendous to opportunity to effect transformational change at Hetch Hetchy Valley by improving access while protecting the area’s wilderness character and wildlife.”

ABOUT RESTORE HETCH HETCHY: The mission of Restore Hetch Hetchy is to return the Hetch Hetchy Valley in Yosemite National Park to its natural splendor while continuing to meet the water and power needs of all communities that depend on the Tuolumne River.