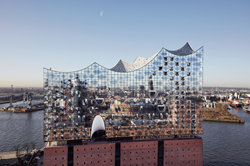 Elbphilharmonie Hamburg is planning to celebrate its fifth anniversary with an extensive cultural program, lasting from January 9 to 17, 2022, it was announced today by the City of Hamburg, Germany. Since its grand opening, the Herzog and de Meuron-designed architectural landmark building has demonstrated night after night the powerful impact of live music experienced in a stunning setting and has greatly contributed to the city’s image as a cultural center. Hamburg has hosted 2500 concerts, the who-is-who of the international music world, tripled its number of concertgoers, welcomed 15 million visitors on the Elbphilharmonie’s viewing platform, and earned a global reputation as a city of music. The Elbphilharmonie now outshines other top German tourist destinations such as Neuschwanstein Castle.
The nine-day festival will include gala concerts, an outdoor light installation by Dutch artists DRIFT, special exhibitions, and tours.

Concerts, light installation, and cultural highlights during the anniversary week

As expected, the focus of the Elbphilharmonie’s anniversary festivities will be on world-class classical music. The program is poised to feature the same variety and high quality for which the concert hall is known, and includes some of the biggest names in music, including Sir Simon Rattle, Daniel Barenboim, Jordi Savall, Charles Lloyd, John Scofield and others, who will perform contemporary music by Esa-Pekka Salonen, Thomas Adès and Jörg Widmann as well as classical music by Jean Sibelius, Gustav Mahler and Robert Schumann. Tickets for the anniversary gala concert on January 11, 2022, featuring the NDR Elbphilharmonie Orchestra under the baton of American conductor Alan Gilbert will be given away by raffle.
More information here.

Extending beyond music, the anniversary celebrations will also feature a large-scale light installation on the exterior of the concert hall, created by the internationally sought-after artist duo DRIFT. Founded by Lonneke Gordijn and Ralph Nauta in Amsterdam in 2007, their work uses original and unexpected light objects to create immersive art and seeks to dissolve the division between the artwork and the observer, by creating a multi-sensual experience. For the Elbphilharmonie’s fifth birthday, DRIFT is conceptualizing a performative outdoor sculpture that creatively comments on the building, as well as its surroundings and its inner life of music.

The art display will be complemented by a dedicated four-months solo exhibition at Hamburg’s Museum for Arts and Crafts (MKG), dedicated to the Dutch artist duo (»Drift: Moments of Connection«, January 6 to May 8, 2022).

During the festival week, Hamburg also plans to host a score of other cultural offerings, such as Tom Sachs’ “Space Program” at the Deichtorhallen, as well as countless stage productions – from theater and musicals to opera and dance performances.

Special travel packages including accommodation, concert tickets for the Elbphilharmonie and a 3-day Hamburg CARD can be booked online at http://www.hamburg-travel.com.

Located in the middle of the Elbe River and surrounded on three sides by water, the building houses two concert halls, one large music education area, food & drink areas, the Westin Hamburg Hotel with 244 rooms, 45 private apartments and the publicly accessible Plaza, which offers unique panorama views of the whole city. The Elbphilharmonie was designed by the Swiss architectural firm Herzog & de Meuron. The architects took the former Kaispeicher A, a tea, tobacco, and cocoa warehouse built between 1963 and 1966, and placed a new glass structure on top of it – the boldly curving roof landscape reaches up 110 meters into the sky. The Elbphilharmonie stands on the western tip of HafenCity, Europe’s largest urban development project.