Florencia Chang-Ageda’s newly released “Divine Revelation: Communion Mysteries Revealed” is a healing volume for those who partake in the Communion

“Divine Revelation: Communion Mysteries Revealed” from Christian Faith Publishing author Florencia Chang-Ageda was written after being enlightened by God about the benefits of partaking in the Communion. 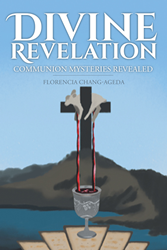 Chang-Ageda shares, “Florencia wrote Divine Revelation: Communion Mysteries Revealed after being enlightened by God about the benefits of the Communion meal. She has been a recipient of the benefits of healing and health, wealth and the wisdom which comes from taking Communion, and would like others to be enlightened as well.

“She has seen many healed from taking Communion and has realized that Jesus did procure healing for everyone who partakes of this meal. She has also discovered that Communion elevates you to another level, because in taking Communion, you are participating in what she describes in the book as Co-union.

“She encourages everyone interested in Communion to read this book, especially if you are afraid of taking it, like she once was.

“May all who read this book be enlightened, empowered, and walk into health and healing.”

Published by Christian Faith Publishing, Florencia Chang-Ageda’s new book is for those who want to be enlightened and empowered.