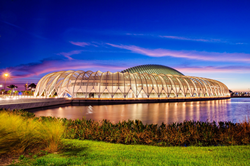 The study points out that a Florida Poly graduate will earn $45,913 more per year than a worker in Florida with only a high school degree. It is the highest average differential of any university in the State University System.

Florida Polytechnic University generates more than $289 million annually in overall economic activity resulting from the school, according to a new economic impact assessment by renowned Florida economist Dr. Rick Harper. This includes more than $161 million in gross domestic product (GDP) to the local and state economy each year. More than $72 million of this GDP impact occurs in Polk County.

The increased economic activity due to the presence of Florida Poly flows from several sources including the University’s operations expenditures, its average annual capital outlays, student spending in the community, and the increased income earning potential that accrues to its graduates. The study indicates that about 61% of the University’s economic impact is driven by the skills, credentials, and increased earning capacity of graduating students.

“The fields of study offered by Florida Poly ensure that high wages are the norm,” Harper said in the assessment. “It is straightforward to see that it is the rigorous teaching and credentialing that Florida Poly offers that will contribute most substantially to regional transformation via successive classes of students.”

The study also points out that a Florida Poly graduate will earn $45,913 more per year than a worker in Florida with only a high school degree. It is the highest average differential of any university in the State University System.

“These findings show the value that Florida Poly brings the community as a whole,” said Dr. Randy K. Avent, University president. “We are confident that as we continue to grow and produce highly-skilled, lifetime employable professionals, the economic impact of our University will be felt even more strongly over time.”

Other key findings in the study are:

“Florida Polytechnic University has only just begun and the economic impact is impressive,” said Sean Malott, President and CEO at Central Florida Development Council. “The State University System along with local community leaders were wise to invest in Florida Poly. I can only imagine the powerful economic engine this will be in 10 years!”

For the most recent university news, visit Florida Poly News.

About Florida Polytechnic University: Florida Polytechnic University is accredited by the Southern Association of Colleges and Schools Commission on Colleges and is a member of the State University System of Florida. It is the only state university dedicated exclusively to STEM and offers ABET accredited degrees. Florida Poly is a powerful economic engine within the state of Florida, blending applied research with industry partnerships to give students an academically rigorous education with real-world relevance. Connect with Florida Poly online at http://www.FloridaPoly.edu.