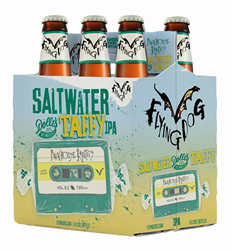 “Our team loves coming up with surprising flavors to wow consumers and when we can do that while partnering with local legends like Dolle’s, it makes it that much sweeter." - James Maravetz, VP of Marketing, Flying Dog Brewery

Another delicious local collaboration has been brewing at Flying Dog. The state’s largest brewery has teamed up with Dolle’s Candyland, the Maryland shore’s iconic saltwater taffy company, to create a first-of-its-kind saltwater taffy beer. Saltwater Taffy IPA, a Brewhouse Rarities release, will be available in 6-packs of 12oz bottles starting the first week of June.

Brewed in conjunction with Ocean City, MD’s historic candy maker, Saltwater Taffy IPA has an unmistakable flavor that takes you back to days full of taffy at the beach, while not letting you forget you’re drinking an IPA. The 7.6% ABV beer perfectly blends the flavor of freshly squeezed lemons and citrus hops with rich notes of vanilla creaminess.

“Our team loves coming up with surprising flavors to wow consumers and when we can do that while partnering with local legends like Dolle’s, it makes it that much sweeter,” said James Maravetz, VP of Marketing at Flying Dog Brewery. “This innovative IPA has a perfect balance of creamy taffy and bright citrus notes to blow your flip-flops off.”

Saltwater Taffy IPA is being released under the Brewhouse Rarities umbrella, meaning that the idea behind this seaside-inspired treat originated from a Flying Dog employee as part of the brewery’s annual pitch program. This delicious partnership isn’t one-sided either, Dolle’s is creating a beer flavored version of their famous taffy with hops provided by Flying Dog. The taffy will be available online at dolles.com and in their Ocean City, MD retail locations.

“Just in time for the sounds, smells, and tastes of summer, Dolle's is extremely excited to pair with Flying Dog Brewery in Dolles' first brand collaboration,” said Anna Dolle Bushnell, President of Dolle's Candyland, Inc. “Taste tests were enjoyed thoroughly between both Maryland businesses as we developed an IPA that invokes fun and summer with inspired flavors of Dolle's lemon saltwater taffy.”

This sweet partnership has some serious history behind it. Dolle’s Candyland has been an Ocean City institution since 1910 when Rudolph Dolle Sr. purchased a small saltwater taffy stand and created the brand. Now four generations later, the Dolle family continues their legacy, creating delicious taffy and treats on their premise daily.