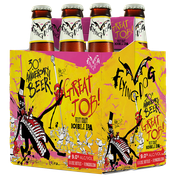 “Our fans are the reason we wake up in the morning, and we’re forever thankful for their continued support of damn good craft beer." - James Maravetz, VP of Marketing, Flying Dog Brewery

For 30 years, Flying Dog Brewery has been marching to the beat of its own drum. To mark the occasion, the brewery did what it does best - brewed a big, hoppy West Coast Style Double IPA that hits like a block party to celebrate. In honor of the brewery’s 30th anniversary, Flying Dog today announced the release of Great Job!, a West Coast Double IPA.

Flying Dog’s brewmasters boiled down everything they have learned in the past 30 years and poured it into one very special anniversary beer. This 9% ABV double IPA balances out the bitterness from Columbus, Centennial and Simcoe hops with subtle toasted malt sweetness. The medium bodied brew is bursting with dank and piney hop aromas and pours a light orange/amber color.

The special anniversary release is the brewery’s way of saying ‘thank you’ to all of their passionate fans that have supported Flying Dog from day one.

“Our fans are the reason we wake up in the morning, and we’re forever thankful for their continued support of damn good craft beer,” said James Maravetz, VP of Marketing for Flying Dog Brewery. “Actions also speak louder than words, so if there is someone in your life that deserves to hear ‘great job!’, don’t just tell them, crack open a beer and hand them one in recognition.”

Flying Dog Brewery’s story began 30 years ago when George Stranahan, founder of the Aspen Center for Physics, opened the Flying Dog Brewpub in Colorado. The name ‘Flying Dog’ was inspired by an oil painting of a dog leaping upward toward the sky that George saw in a hotel in Pakistan after George and his ‘band of innocents’ trekked down from K2’s base camp.

30 years later, Flying Dog is proudly based in Maryland with a team of more than 100 dedicated craft beer crusaders, and it continues to be one of the fastest-growing regional craft breweries in the Mid-Atlantic.

“To elaborate on a thought from our beloved friend and the artistic genius Ralph Steadman, it’s been 30 years from there to here,” said Jim Caruso, CEO for Flying Dog Brewery. “Thank you to all our fellow travelers and kindred spirits for joining us on this great adventure. We love you and we are even more enthusiastic about the upcoming decades.”

The team at Flying Dog believes that beer is an art form, and uses creativity, humor, and innovation to challenge the status quo. With strong ties to the Gonzo founders themselves, Flying Dog is constantly drawing inspiration from Hunter S. Thompson’s relentless truth seeking and Ralph Steadman’s provocative drawings. Steadman has also created artwork for every major Flying Dog beer release since 1995.

A past anniversary beer, Raging Bitch, was released in celebration of the brewery’s 20th, and it was Flying Dog’s best-selling beer for almost 10 years. Great Job! began shipping to distributors on Friday, September 18th and is available in 6-packs of 12 oz. bottles.