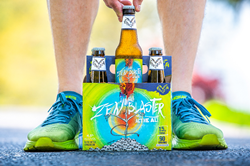 “For consumers focused on wellness, or those who simply want a lighter beer to sip on in the summertime, Zen Blaster is a more health-conscious alternative without compromising on taste and quality.” - James Maravetz, VP of Marketing, Flying Dog Brewery

Just in time for summer activities like outdoor yoga, hiking and trying not to fall off a stand-up paddleboard, Flying Dog Brewery is announcing the release of the brewery’s low calorie, low carbohydrate hopped blonde ale, Zen Blaster Active Ale. The light-bodied brew will be available in stores by mid-June in 6-packs of 12 oz bottles.

Brewed by the brewery’s in-house yoga master and made with lotus hops, this low calorie/low carb ale will have mind and body at peace. At only 90 calories and 1.5g carbs, Zen Blaster is perfect for active lifestyles. The beer’s aroma gives notes of tropical fruits and vanilla while its light flavor profile finishes dry. This refreshingly light ale carries a 4.5% ABV and 10 IBUs.

“For consumers focused on wellness, or those who simply want a lighter beer to sip on in the summertime, Zen Blaster is a more health-conscious alternative without compromising on taste and quality,” said James Maravetz, VP of Marketing at Flying Dog Brewery.

Changing mindsets around alcohol and active lifestyles, combined with a post-2020 desire to refocus on wellbeing, has increased interest in lower-calorie and lower alcohol craft options in consumers. With Zen Blaster, the team at Flying Dog is able to deliver the brewery’s usual high quality, delicious craft beer in a more health-conscious package.

To achieve culinary enlightenment while sipping on Zen Blaster, roll out your yoga mat and snack on creamy, mild or herb-y cheese like Fontina, or lighter sandwiches like chicken pesto on ciabatta or a caprese panini.

Zen Blaster will be available in stores starting mid-June 2021 in 6 -packs of 12oz bottles. Consumers are encouraged to visit Flying Dog’s Beer Finder to locate inventory in their area: flyingdog.com/beer-finder.