Sitting is the new smoking. This sitting solution burns calories, increases energy and productivity right from your chair - at work, at home, on the go - even on long flights. 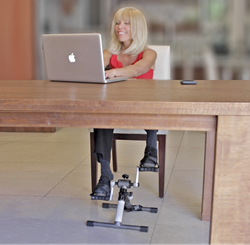 I invented FlyteBike™ Portable Pedals so I can easily and conveniently fit in my fitness, anywhere.

The average American sits 9.3 hours every day, which seriously impacts our health. Sitting for hours at a time slows metabolism, decreases mental acuity and contributes to many life-threatening health problems including blood clots (DVT.) Worst of all, according to Mayo Clinic, Blue Zones and Harvard studies, there is a loss of 20-minutes of life expectancy for every hour spent just sitting there.

Former longtime Broadway star, personal trainer and inventor, Robin (Boudreau) Palmer, couldn’t stand just sitting all day and during long flights. Since necessity has always been the mother of Robin’s inventions, she invented FlyteBike™ Portable Pedals to counteract the negative effects associated with “just sitting there.” Robin understands the pressures of a hectic lifestyle and feels passionately that you shouldn’t have to choose between your wellness and your work. As Palmer puts it, "Simply pedaling with FlyteBike™ for a few minutes a couple of times a day gets people fit while they sit."

FlyteBike™ has unique, patent pending design features which separate it from other stationary pedal devices. FlyteBike Portable Pedals is 3 ½ pounds, folds flat and goes anywhere with you in its own bag. Unlike other pedal products which are made of heavy steel, with rods that can heat up and burn customers, FlyteBike has been designed with a Patent Pending lightweight aluminum, which does not conduct heat. FlyteBike is also rolling out its digital IoT Smart Pedal™ sensor and tracking app for use with Corporate Wellness programs, Healthcare discounts and Physical Therapy.

FlyteBike™ has been awarded NEAT certification. NEAT stands for the science of Non-Exercise Activity Thermogenesis, developed by Mayo Clinic. Their research showed that FlyteBike™ increased energy expenditure at 96 points higher than the 0 baseline of simply sitting. In comparison, a standing desk is rated at only 23 points higher than the 0 baseline.

The FlyteBike™ Crew has completed a year of testing and prototyping and launched its Indiegogo crowdfunding campaign on August 15th, 2017 to complete funding for the first large manufacturing run. https://igg.me/at/flytebike

More About FlyteBike™
FlyteBike™ was invented by Ms. Palmer in 2016. Palmer has FlyteBiked her way around the world - in offices, hotels, cars, on boats, buses, beaches, and has even completed 12 successful test flights on planes. The FlyteBike™ Crew has decades of innovative product development and manufacturing expertise, including an engineer with 20 aerospace alloy patents, who helped build the US Space Shuttle. FlyteBike™ is Patent Pending and Trademarked. For more information, visit http://www.FlyteBike.com

Robin Boudreau Palmer in CATS, The Pirates of Penzance, and Joseph...