J. D. Riley explores topics of racism, religion, and American society in the South in the 1970s in ‘A Jeweler’s Eye View’ 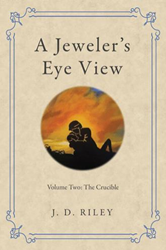 In the ongoing saga of Jake Goodson, the battle between a vicious religious cult and a father continues as his attempts to reunite with his children becomes a journey with deeper spiritual implications. J. D. Riley resumes his series with “A Jeweler’s Eye View: Volume Two: The Crucible” (published by Archway Publishing).

As Jake Goodson works to try to rescue his children from a white supremacist religious cult, the story demonstrates the deeper diabolical cunning of the cult leader, Daniel Hightower. The tension between Jake and Daniel persists as Daniel reprises his attacks on Jake and his family for trying to get his children away from his clutches. The character of Sam, the older African-American fiancé of Jake's mother, is developed at a deeper level in this volume, taking the reader back into his dark past experiences growing up in the South in the 1920's and 1930's, and of going off to war in 1944 Europe. He is revealed as a man of unexpected depth and character.

“That there is a hope for victory that runs deeper than winning by physical force over one's adversary. In the end, that choosing love will prevail,” Riley says about the message of his book. He adds. “I explored cults during my undergraduate work in Philosophy and Religion, and became intrigued with the phenomena and what makes them tick. My personal struggles as well as my professional work in treating addictions has also led me into a deeper exploration of the human psyche, and how people find answers to the age-old problems/questions of living life on life's terms in the this world.”

About the Author
J. D. Riley is a licensed clinical therapist who has worked in addiction treatment since 1982. He earned a bachelor’s degree in philosophy and religion from Berry College in Rome, Georgia, and a master’s degree in counseling from the University of Georgia in 1982. He is a U.S. Army veteran who has a special interest in victims of PTSD, and cults and the psychology behind them. Riley currently lives with his family in Atlanta, Georgia.