Artist Bernie Freytag releases "Find Wonder in the Ordinary, A kids book for adults", an exploration of the wonder in the world, through whimsical illustrations and anecdotes. 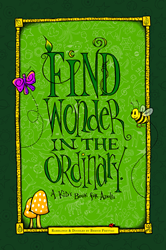 Through Bernie’s observations and illustrations, we see how the creative mind works, and how all inspiration is ultimately drawn from the wonder found in everyday life.

It was an ordinary springtime evening in 2000 when Bernie Freytag was training for his first marathon with a bike ride along the Charles River in Boston. Days later, Bernie woke up in Massachusetts General Hospital, surrounded by friends and family who seemed familiar to him, yet he struggled to know exactly who all of them were. For some yet to be determined reason, he fell, and struck his head on the metal grates along the Cambridge side of the Charles. Thanks to the help of a stranger passing by, he was alive, but suffering from a traumatic brain injury.

Bernie subsequently spent a week recovering in the hospital, followed by nearly 10 months of rehabilitation. As he navigated his recovery, he had visions of his childhood. These visions changed the way he viewed the world...and changed his understanding of the power of the brain. Now, nearly 20 years later, Find Wonder in the Ordinary chronicles his “new” view of the world. Having to re-learn so much in his life, Bernie often turned back to his childhood memories for comfort as he attempted to start over with a fresh view: the view of a child seeing the world for the first time.

Wondering what a kid’s book for adults could be?

"Find Wonder in the Ordinary", the book.

This book is an eclectic collection of musings, life lessons, and silly drawings. Through the author’s writings and whimsical drawings, we are reminded to find wonder within the ordinary…and beyond. The book is a guide, or as the author likes to say, “It’s more like a drinking buddy.” Think of it as a companion who helps provide perspective, and changes how you see the world.

Through Bernie’s observations and illustrations, we see how the creative mind works, and how all inspiration is ultimately drawn from the wonder found in everyday life. It is by viewing the ordinary through the artist’s prism that we can all find the wisdom and wonder of a child.

"Find Wonder in the Ordinary" is a result not only of his long recovery, but of Bernie’s many subsequent adventures in Boston, Upstate New York and the Adirondacks, and his travel abroad. All these adventures impacted him in a much different way since he began viewing the world through a child’s eyes.

Bernie Freytag has been creating art since a very young age, mostly through illustration and design. He currently is the Creative Director at Romanelli Communications in Clinton, NY/Boston, MA. He has also conjured up many cartoons over the years, most of which have been respectfully rejected by "The New Yorker" magazine. Bernie lives simply, on a remote hill in Sangerfield, NY with his dog (not unlike the Grinch, but without all the animosity).