Students at Texas A&M University in College Station are getting a taste of other cultures by learning about diverse foods, including those considered “fitting and proper” for various religious and ethnic groups. 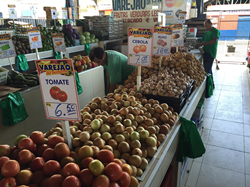 “Introducing students to Jewish and Muslim traditions in harvesting and preparing meat helps them expand their understanding of other cultures and religions, while also acknowledging the growing social and economic impact of these groups…” — Dr. Jeff Savell

For additional photos and cut lines, go to https://today.agrilife.org/2019/01/29/fooddiversity/

Students at Texas A&M University in College Station are getting a taste of other cultures by learning about diverse foods, including those considered “fitting and proper” for various religious and ethnic groups.

“Kosher and halal are terms that apply to foods deemed acceptable to and properly prepared for adherents to Jewish and Muslim faiths, respectively,” said Dr. Jeff Savell, distinguished professor of animal science, Texas A&M College of Agriculture and Life Sciences. “The dietary guidelines of both are based on food laws rooted in scripture – the Torah for kosher and the Quran for halal.”

Savell, E.M. “Manny” Rosenthal Chairholder in the department of animal science, is the primary lecturer for the Animal Science 307 “Meats” class. In this class, he provides students with instruction on the history, traditions and dietary laws regarding kosher and halal meats.

“Introducing students to Jewish and Muslim traditions in harvesting and preparing meat helps them expand their understanding of other cultures and religions, while also acknowledging the growing social and economic impact of these groups in Texas and the U.S.,” Savell said.

The word kosher, which means “pure” or “clean,” refers to meat and other foods that have been ritually prepared or blessed and are deemed acceptable for consumption by religious Jews. The preparation of halal meat focuses mainly on the slaughter process to make it “lawful or permissible” for Muslims to eat.

“Both kosher and halal are concerned with the condition, treatment and humane dispatch of any animal,” Savell explained.

However, he said, consumption of pork or of animal blood is eschewed by those of both the Jewish and Islamic faith.

Ray Riley, manager of the Rosenthal Meat Science and Technology Center manager with Texas A&M AgriLife Research, said as ethnic populations grow it becomes more important for students to learn these groups represent part of the international market, and what is needed to supply that market.

Riley said students are taught about kosher and halal in the lecture portion of the course and not the meat lab, as the process of making meats kosher or halal requires specific religious guidelines be followed.

“Also, in the case of kosher meats, the processing equipment is often complex and can be costly, requiring trained professionals who can certify the products and processing facility,” he said.

Bailey Carwile, a sophomore studying animal science at Texas A&M, is one of the thousands of students to date who have taken Savell’s course.

Carwile said it was interesting to find out all that goes into preparing kosher and halal meats, and to be mindful of other cultures and religions and the reasons their food needs to be prepared a certain way.

“There are many more steps, guidelines and people involved than I ever imagined,” she said. “Learning about different foods and why they are preferred by certain ethnic groups or prepared a certain way gives us many insights on other cultures and religions. It can be an eye-opening experience.”

Students in the Religious and Ethnic Foods class taught by Dr. Mian Riaz, professor of food diversity in Texas A&M’s nutrition and food science department, learn not only about kosher and halal foods but about diverse foods from throughout the world.

“This class is very useful for future food scientists and food technologists, as well as nutritionists and dieticians,” Riaz said. “It is the only one in the country that examines the worldwide diversity of diet.

“While other programs in the country address kosher and halal foods, this program is unique in its comprehensive look at diets from an array of faiths, as well as its examination of vegetarian foods and the foods of various ethnic groups such as Chinese, Indian, Arabic, African, Mexican and Latin American.”

In addition, last year the Texas A&M Foundation was gifted $5 million by the Islamic Food and Nutrition Council of America to create a program in food diversity in the nutrition and food science department. The program will educate students about ethnic and faith-based foods and help them understand different attitudes, beliefs, traditions and geographic regions.

Sharp and Stover espouse development of a food system that meets the health and quality-of-life needs of the population and uses science to connect agriculture, dietary health and food.

“There are many people in the U.S. who consume kosher, halal and ethnic foods not only because they meet certain religious dietary laws but also for their taste, uniqueness, dietary or health reasons, or cleanliness and safety,” Talcott said.

He noted food and nutrition researchers are constantly finding the health benefits of certain religious or ethnic foods and/or their individual ingredients.

FACT: Lamb and goat meat are often part of the Muslim diet, and goat meat is frequently eaten in Mexican, Greek, Indian and other cultures, especially during ethnic holidays and celebrations, said Dr. David Anderson, Texas A&M AgriLife Extension Service economist and livestock market specialist, College Station. Anderson said Texas is the largest producer of sheep and goats in the U.S., outproducing the next several states combined. The majority of Texas' sheep and goat production is in West Texas and the Texas Hill Country.