ULTRA4 Racing and the legendary Nitto King the Hammers event get the 2020 racing season started with Ford Motor Company named as Official Vehicle. 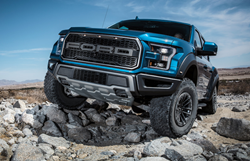 "It is truly humbling to think that in just over a decade our dedicated staff, loyal fans and fearless racers have helped build a motorsport and lifestyle platform that a global brand like Ford truly believes in." - Dave Cole, King of the Hammer founder

ULTRA4 Racing has announced today Ford Motor Company is the Official Vehicle of ULTRA4 Racing and Nitto of King of the Hammers.

The news comes as the off-road world prepares for the legendary Nitto King of the Hammers race week that takes place in Southern California January 31st through February 8, 2020. The week kicks off with UTV races followed by a strong lineup of stock, modified, Legends, T1 Desert Trucks, ULTRA4 unlimited cars, and motorcycles. The T1 and ULTRA4 races are the richest purses in off-road racing. Over 500 teams will compete from across the country and globe.

The event has become a destination for the off-road motorsports enthusiast and is known for epic racing action through the rocky terrain features of the Hammers trails. It began in 2007 with only twelve teams of friends competing for bragging rights in a challenge no one thought could be done in one day. Over the next dozen years, fabricators have continued to innovate with the goal to build the best unlimited vehicles in the attempt to be crowned “King.” Today, King of the Hammers is considered the toughest series of one-day races in the sport of off-road, while at the same time having a festival atmosphere centered around the makeshift event venue known as “Hammertown.”

“Our racers and spectators are as authentic and passionate as they come,” explained King of the Hammers founder Dave Cole. “It is truly humbling to think that in just over a decade our dedicated staff, loyal fans and fearless racers have helped build a motorsport and lifestyle platform that a global brand like Ford truly believes in. We are a perfect fit and we couldn’t be more excited to get the 2020 racing season started with Ford as our official vehicle partner.”

“Working with ULTRA4 Racing and King of Hammers is a natural for Ford based on our truck, SUV and off-road heritage,” said Mark Rushbrook, global director, Ford Performance Motorsports. “We feel very much at home with King of Hammers as we build on our rich history of off-roading by continuing to test the all-new Bronco at the course’s epicenter – Johnson Valley – which features many of the same trails used in the race.”

ULTRA4 Racing
ULTRA4 is a vehicle type, a class, a lifestyle, and an International racing organization. ULTRA4 Racing was born from the popularity of the annual Nitto King of the Hammers, the toughest one-day off-road race in the world. In just a little over a decade, the sport has grown from the single King of the Hammers race to a worldwide racing series, featuring over a dozen races in the US, Mexico, Europe, and New Zealand. The vehicles range from unlimited four-wheel drive creations to stock classes to UTV’s. ULTRA4 vehicles are capable of competing in multiple racing disciplines, from extreme rock crawling, to high-speed desert racing, to short course. ULTRA4 Racing is managed by Hammerking Productions located in Temecula, CA. ultra4racing.com

Nitto King of the Hammers
Nitto King of the Hammers (KOH) is the annual destination event for motorsports enthusiasts from across the globe. It takes place annually in Southern California in the Johnson Valley OHV area. The race began just over a decade ago with twelve people racing for bragging rights in ULTRA4 vehicles capable of tackling extreme rock climbs and descents, high-speed racing, and short-course. Today, KOH is a weeklong festival of racing that encompasses Ultra4 vehicles, UTVs, motorcycles, T1 desert trucks, and stock to stock-modified off-road vehicles. To learn more about King of the Hammers, visit http://www.ultra4racing.com. Follow on Facebook at http://www.facebook/kingofthehammers and @Ultra4Racing on Instagram and Twitter.