Foresight Institute, a leading think tank, research, and public interest organization focused on molecular manufacturing and other transformative technologies, announced the 2019 winners for the prestigious Feynman Prizes, named in honor of pioneer physicist Richard Feynman, for experiment and theory in nanotechnology, as well as the Distinguished Student Prize. “The problems of chemistry and biology can be greatly helped if our ability to see what we are doing, and to do things on an atomic level, is ultimately developed — a development which I think cannot be avoided.” - Richard P. Feynman, 1959 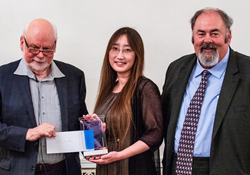 Foresight Institute, a leading think tank, research, and public interest organization focused on molecular manufacturing and other transformative technologies, announced the winners for the 2019 Foresight Institute Feynman Prizes. These are given in two categories, one for Experiment and the other for Theory in nanotechnology/molecular manufacturing.

Lulu Qian, Professor of Bioengineering and head of The Qian Lab at the Division of Biology and Biological Engineering at the California Institute of Technology (Caltech), received the 2019 Foresight Institute Feynman Prize for Experimental work.

Professor Qian has made major contributions to three areas:

Her goal, with members of the Caltech Qien Lab, is to create synthetic molecular programs that approach the complexity and sophistication of life itself.

Giulia Galli, Liew Professor of Electronic Strictures and Simulation, Senior Scientist at Argonne National Laboratory, and Head of the Galli Group in the Pritzker Schoo of Molecular Engineering at the University of Chicago received the 2019 Foresight Institute Feynman Prize for Theory.

The contributions of Galli to devising atomically-precise products through the use of molecular machine systems have been two-fold:

The methods pioneered by Galli include