Foresight Institute, a leading think tank, research, and public interest organization focused on molecular manufacturing and other transformative technologies, announced the 2020 winners for the prestigious Feynman Prizes, named in honor of pioneer physicist Richard Feynman, for experiment and theory in nanotechnology. 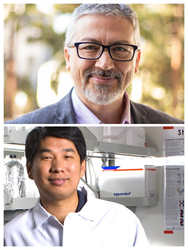 “The problems of chemistry and biology can be greatly helped if our ability to see what we are doing, and to do things on an atomic level, is ultimately developed — a development which I think cannot be avoided.” - Richard P. Feynman, 1959

Foresight Institute’s Feynman Prizes are given in two categories, one for Experiment and the other for Theory in nanotechnology/molecular manufacturing.

Hao Yan, Professor in Chemistry and Biochemistry and Director of the Center for Molecular Design and Biomimetics in the Biodesign Institute at Arizona State University, received the 2020 Foresight Institute Feynman Prize for Experimental work.

Dr. Hao Yan is a leading expert in the world working on structural DNA nanotechnology and has made numerous significant contributions to the science of using nucleic acids as designer molecular building blocks for programmable molecular self-assembly. He has been a pioneer in the design and construction of a series of novel DNA nanostructures and nanomechanical devices, and the development of DNA directed enzyme cascades, nanoparticle arrays and light harvesting complexes, utilizing the chemical and spatial addressability of nucleic acid molecules.

Hao Yan studied chemistry and earned his BS degree at Shandong University, China. He obtained his PhD in Chemistry under Professor Ned Seeman, New York University in 2001, working on design and construction of sequence dependent DNA nanomechanical devices. He then moved to Duke University, where he continued to explore his interests in DNA based molecular computing and programming. He joined Arizona State University as Assistant Professor in the Department of Chemistry and Biochemistry in 2004. In 2008, he was promoted with early tenure directly to Full Professor and he is currently the Milton D. Glick Distinguished Professor in Chemistry and Biochemistry and Director of the Center for Molecular Design and Biomimetics in the Biodesign Institute at Arizona State University. The theme of his research is to use nature’s design rules as inspiration to advance biomedical, energy-related, and other technological innovations through the use of self-assembling molecules and materials. He aims to create intelligent materials with better component controls at the molecular level. He is leading an interdisciplinary team to design bio-inspired molecular building blocks and program their higher order assembly into systems that will perform complex functions. Dr. Yan has served as president of the International Society for Nanoscale Science, Computation and Engineering.

Professor Di Ventra has made major contributions to several areas of nanotechnology and condensed matter theory:

Massimiliano Di Ventra obtained his undergraduate degree in Physics from the University of Trieste (Italy) in 1991 and did his PhD studies at the Swiss Federal Institute of Technology in Lausanne in 1993-1997. He is now professor of Physics at the University of California, San Diego. Di Ventra's research interests are in condensed-matter theory and unconventional computing. He has been invited to deliver more than 300 talks worldwide on these topics, including 15 plenary/keynote presentations. He has published more than 200 papers in refereed journals (he was named 2018 Highly Cited Researcher by Clarivate Analytics), has 4 granted patents, co-edited the textbook Introduction to Nanoscale Science and Technology (Springer, 2004) for undergraduate students, he is single author of the graduate-level textbook Electrical Transport in Nanoscale Systems (Cambridge University Press, 2008), and of the trade book The Scientific Method: Reflections from a Practitioner (Oxford University Press, 2018). He is a fellow of the American Physical Society, the Institute of Physics, and foreign member of the Academia Europaea. He is the co-founder of MemComputing, Inc.

About the Foresight Institute

Foresight Institute advances technologies of fundamental importance to the long-term future of life and the biosphere focusing on molecular machine nanotechnology, biotechnology, and computer science. We reward excellence, restrain recklessness, and create community to promote beneficial uses of these technologies and reduce misuse and accidents potentially associated with them.