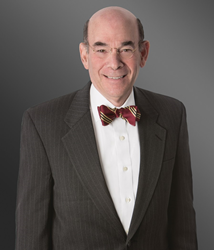 “Bob’s return to Greenberg Traurig is one aspect of our strategy to grow in elite areas of practice in which we are already recognized as best in class, and which are important to our clients across sectors and markets,” said Richard A. Rosenbaum, Greenberg Traurig’s Executive Chairman.

“Bob is a proven leader and key figure in the health care industry. Indeed, he was previously a valued leader and part of the firm's cultural and quality fabric his first time with us. Having him rejoin at this time speaks to his and our commitment to Washington, D.C. and to the many stakeholders in an industry thrust into the limelight by the global health crisis - as well as our ability to serve the many  private equity investors so active in the space,” said Richard A. Rosenbaum, Greenberg Traurig’s Executive Chairman. “Bob’s return to Greenberg Traurig is one aspect of our strategy to grow in elite areas of practice in which we are already recognized as best in class, and which are important to our clients across sectors and markets.”

In January 2018, Charrow was sworn in as HHS general counsel. In that role, he led an office of more than 600 lawyers and oversaw the chief counsel for the various agencies within the department, including the Food and Drug Administration, the Centers for Medicare & Medicaid Services, and the various Public Health Service agencies such as the National Institutes of Health and the Centers for Disease Control and Prevention.

Charrow, in his HHS role, helped the U.S. government navigate the legal aspects of its response to the global health crisis. He also actively participated in formulating department policy with respect to Medicare reimbursement, fraud and abuse, the Affordable Care Act, the PREP Act, drug and device approvals, drug pricing, including 340B issues, tort liability, and technology transfer. Bob was a board member of Operation Warp Speed, a public-private partnership initiated by the United States government to accelerate the development, production, and distribution of COVID-19 vaccines, therapeutics, and diagnostics.

“This is an extraordinary time in our country, including in the development of health care legislation and litigation. It also is an exciting time at Greenberg Traurig. I am fortunate and excited to return and look forward to working closely with former and new colleagues, particularly the co-chairs of the firm’s Health Care & FDA Practice Nancy E. Taylor and David C. Peck,” Charrow said.

“There are few entities today not touched by the various aspects of health care and its impact on a global economy, national, and multinational corporations, governmental and non-governmental agencies and functions, and individual employers. Bob’s experience is a source of pride for the firm and will undoubtedly prove to be of value to our clients,” Taylor said.

In private practice Charrow focuses on research, biotechnology and health care issues. He represents health care providers, insurers, pharmaceutical companies, universities, research institutes and other entities with respect to regulatory and litigation matters arising under the Federal Food, Drug, and Cosmetic Act, Public Health Service Act, including the PREP Act, Medicare, Medicaid and Affordable Care Act, and fraud and abuse issues that may arise under the False Claims Act and other federal laws. He also participates regularly in preparing Supreme Court briefs and certiorari petitions.

Charrow holds a J.D. from Stanford Law School and a B.S. from Harvey Mudd College. Charrow has written extensively in the area of science and the law, and in particular on the effects of the legal system on scientific research, product development and health. Charrow was a writer of a brief that was cited by the U.S. Supreme Court in the landmark 1993 decision, Daubert v. Merrell Dow Pharmaceuticals, which set standards for the admissibility of scientific evidence at federal trials.

About Greenberg Traurig: Greenberg Traurig, LLP (GT), has approximately 2200 attorneys in 40 locations in the United States, Latin America, Europe, Asia, and the Middle East. GT has been recognized for its philanthropic giving, diversity, and innovation, and is consistently among the largest firms in the U.S. on the Law360 400 and among the Top 20 on the Am Law Global 100. The firm is net carbon neutral with respect to its office energy usage and Mansfield Rule 3.0 Certified. Web: http://www.gtlaw.com