‘The Unknown Basement’ by Salomon H. Soria presents his autobiographical account of the most important and painful episode of his life after leading the police strike of May 1987 in Huancayo, Peru 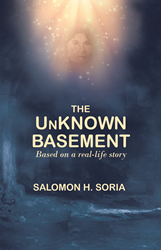 By sharing his own violation of human rights, Soria hopes his story helps find justice and healing for others impacted by similar experiences.

In Salomon H. Soria’s compelling new memoir, “The Unknown Basement: Based on a Real-Life Story,” the author details his painful experience of being kidnapped, interrogated, tortured, and imprisoned in the basement of the National Intelligence Service of Peru. His story begins with the events that led up to his kidnapping, chronicles his false imprisonment and concludes with where he is at in life over 30 years later.

In his role as Lieutenant of the National Police in Peru, Soria experienced many turbulent times, including eight years of duty in a terrorist area, which earned him a respected reputation and leadership role. However, in 1986, things changed forever when Soria and his command were tasked with an investigation following a mass murder of local citizens in Tocash, Peru. Upon their inspection, evidence pointed directly to the national Navy who had tortured and murdered residents in hopes of gaining intel about terrorist groups operating in the area. After sharing his findings with his superior officer, all the evidence Soria presented was confiscated and he was thrown off the case. In the months following, he was then instructed to lead a police labor strike due to a potential infiltration and presence of terrorists at the event. The strike was not only successful but was also peaceful – a victory in Soria’s mind but unbeknownst to him, it was all a set up known as a “scapegoat.”

“Despite my attempts to convince Intelligence officials that I had been set up in retaliation for my findings, they believed I had been working with the terrorists and had acted treasonously,” said Soria. “After a year and a half of government imprisonment, I was released and instructed by officials not to discuss what had happened. In an effort to silence me and avoid death threats, I was granted a Visa for the United States and given a position as a Correspondent for the United Nations.”

Soria’s decision to flee Peru was not an easy one as he was forced to leave together with his family, however, his first marriage had fallen apart and he was dealing with the aftereffects of his traumatic experience. Years later, Soria was diagnosed with PTSD after continuing to struggle with the horror and darkness he had lived through. He was encouraged by his therapist to write down his story as a form of therapy which led to him publishing “The Unknown Basement.” By sharing his own violation of human rights, Soria hopes his story helps find justice and healing for others impacted by similar experiences. To learn more, please visit http://www.salomonsoria.com.

About the author
Salomon H. Soria, a professional bilingual, was born in Chincha, Ica, Peru and graduated in Administration and Police Science, as a Second Lieutenant, at the Peruvian National Police School. He specialized in the fight against terrorism. He also studied Public Relations at the Superior Institute of Communications Science “Alejandro Deustua” of Huancayo, Peru and CIS at Dover Business College in Paramus, New Jersey. Soria worked as a correspondent for the United nations for Vida Diplomatica Magazine (1989-1996) and is the author of the Spanish book “El Sótano del Servicio de Inteligencia Nacional”. Currently, he works for a prestigious limousine company and lives with his wife Stephanie, and two children, in New Jersey.