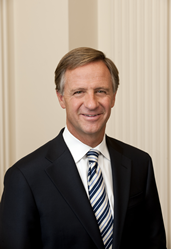 The Volcker Alliance is pleased to announce that former Tennessee Governor Bill Haslam has joined its board of directors. The Volcker Alliance’s board, which is chaired by the organization’s founder and former chairman of the Federal Reserve Board of Governors, Paul A. Volcker, includes a bipartisan, distinguished group of former federal, state, and local officials, along with business leaders and scholars.

“Governor Haslam has a passion and an aptitude for creating a government that is responsive to its citizens and adaptable to the needs of a changing nation,” said former New Jersey senator Bill Bradley, vice chairman of the Volcker Alliance’s board. “He has an impressive track record of making government work better. His advice will be invaluable in guiding the future direction of the Volcker Alliance.”

Governor Haslam served as the forty-ninth governor of the State of Tennessee from 2011 to 2019. He is credited with positioning Tennessee as a national leader in education, economic development, efficient government, and fiscal strength.

“It is a privilege to join the leadership of the Volcker Alliance,” said Governor Bill Haslam. “A simple part of my philosophy in public office was to make sure that people get a dollar worth of value for a dollar worth of tax paid. I have long admired Paul Volcker’s courageous service to our country and believe, as he does, that an effective, prepared public sector workforce is key to making sure government delivers the value people deserve.”

Under the Haslam administration, Tennessee gained approximately 450,000 private sector jobs, and unemployment reached the lowest level in state history. He also worked to reform programs that offered tuition-free access to higher education, most notably implementing the Tennessee Promise program in 2015, which entitled all Tennessee students to two years of tuition-free in-state community or technical college. Under his leadership, the college-going rate in Tennessee increased to a high of nearly 64 percent in 2017.

From 2017 to 2018, Haslam chaired the Republican Governors Association. Prior to becoming governor, Haslam served as the mayor of Knoxville from 2003 to 2011. As mayor, he tripled the city’s rainy day fund through a successful balanced-budget policy and encouraged retail growth through tax subsidies, successfully recruiting thousands of jobs to Knoxville. He also helped found key local education initiatives, including Knox Achieves, which influenced the Tennessee Promise program that he signed into law as governor.

“We are extremely pleased and honored that Governor Haslam has joined our board of directors,” said Thomas W. Ross, president of the Volcker Alliance. “He is an accomplished and inspiring leader, with an unusual depth of expertise in the Volcker Alliance’s work at both the municipal and state levels. As governor, he achieved great popularity with his clear-eyed, compassionate focus on delivering better services and building a better future for the citizens of Tennessee. He has said he wants to be remembered for doing the right thing. What more could we want from a leader in the public service?”

The Volcker Alliance was founded in 2013 by Paul A. Volcker, who served in the federal government for almost thirty years and is known for his commitment to effective government that works for the public good. Visit volckeralliance.org to learn more.

The Volcker Alliance advances effective management of government to achieve results that matter to citizens. We envision a public sector workforce with the experience, preparation, and commitment to ensure that government is accountable and delivers with excellence. Visit volckeralliance.org to learn more. Follow us on social media @VolckerAlliance and subscribe to the Volcker Alliance newsletter for the latest news and developments. The Volcker Alliance is a 501(c)(3) organization.