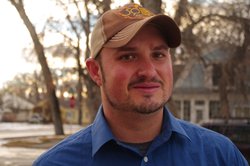 Great Falls is the third largest metropolitan area in the state and a main agricultural center. Sporkin-Morrison’s work includes a focus on the use of alternative protein sources derived from plants.

Sporkin-Morrison, 35, is a former agricultural attaché with the U.S. Department of Agriculture’s (USDA) Foreign Agricultural Service and the former acting senior commercial officer at the U.S. embassy in Guatemala. Following his work in diplomacy, Sporkin-Morrison relocated to Montana, where he served as the chief economist for AgFertilizers, Inc. He led strategic financial and workforce decisions and business-to-business relationship management for the Great Falls-based distributor.

“I now have the chance to help move the needle in my state. I can use my education and experience to bolster and grow a regional economy, with the hopes of making a real difference,” says Sporkin-Morrison.

The agricultural economist, whose work as an analyst has helped predict consumer and economic trends, now sets his sights on sustainability and economic growth.

Sporkin-Morrison suggests there is substantial room for innovation within food and bioprocessing – a promising area being the alternative protein movement. Derived from plant sources – including cereal grains and pulse crops – alternative proteins offer a growing domestic market for Montana’s agricultural products.

“Montana produces an abundance of high-quality wheat and barley,” Sporkin-Morrison adds. “We grow pulse crops, we have low location costs and our governmental entities are supportive of economic development. Great Falls, Mont., in particular, is a natural focal point for advancements in food and biosciences, with plentiful resources, a central location and a business model that’s conducive to success.”

Great Falls has emerged as an innovation hub for global companies. The growth is part of a foreign investment “boom” in the region. Great Falls Montana Economic Development Authority also recently opened a BNSF-certified industrial park to attract more companies, called AgriTech Park, which offers ready-to-build lots with access to utilities and rail.

Sporkin-Morrison looks forward to continuing his work with the Great Falls Montana Economic Development Authority, noting that, “It’s not much different than my work in the Foreign Service. I always recall our shared sense of humanity. It’s what allowed me to successfully navigate diplomatic service, and it will propel me forward in my work with Great Falls Montana Development Authority.”

The director and former diplomat was on diplomatic assignment as an agricultural attaché at the U.S. embassy in Guatemala City from 2010-13, where he also served as an acting senior commercial officer (SCO) for part of his tour. As an acting SCO, he led commercial advocacy efforts with the Guatemalan government, focusing on areas such as arms and telecommunications sales. With the USDA, Sporkin-Morrison oversaw the development, implementation and monitoring of multi-million-dollar U.S. government assistance programs with foreign governments and non-governmental organizations (NGO).

The ceremonial opening of AgriTech Park in Great Falls, Mont. The industrial park offers ready-to-build lots with access to utilities and rail.Photo courtesy of GFDA.