The 2Blades Foundation today announced that former University of Illinois President Robert Easter has agreed to join its Sustainability Council, sharing his considerable experience in agriculture policy and practice to aid 2Blades’ mission to support global food security through the discovery, advancement, and delivery of genetic improvements in crop disease resistance. 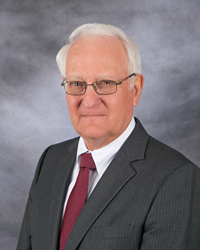 “I was introduced to work of the 2Blades Foundation about three years ago,” Easter said, “and I have been impressed by their genuine commitment to use the modern tools of genetic improvement to address age-old problems such as yield improvement and disease resistance..."

“We’re honored and thrilled that Bob will be working with us, given his distinguished career in academia as both an administrator and agricultural faculty member, his consultations with high-level policymakers, and his experience as a grain and livestock farmer,” said 2Blades President Diana Horvath. “He understands what we do and how we fit into efforts to feed the additional 2 billion people who will live on the earth by the year 2050.”

“I was introduced to work of the 2Blades Foundation about three years ago,” Easter said, “and I have been impressed by their genuine commitment to use the modern tools of genetic improvement to address age-old problems such as yield improvement, disease resistance, and sustainable storage of harvested food in crops critical to the nutrition of those with limited resources globally. It is a noble calling and I am delighted to have this opportunity to contribute in any way that I can.”

Dr. Easter was appointed president-designate of the University of Illinois in March 2012, and became the university’s 19th president in July 2012 until his retirement in 2015. Before becoming president, he spent his entire, nearly 40-year career as a senior administrator and faculty member on the university’s Urbana-Champaign campus, where he earned his doctorate in animal science in 1976. He was interim chancellor from 2009-2011, serving as chief executive officer of the 42,000-student campus, and also served as interim provost and interim vice chancellor for research. He presently holds the rank of President and Professor Emeritus.

From 2002-2009, he was dean of the nationally ranked College of Agricultural, Consumer and Environmental Sciences. Before that, he served as head of the Department of Animal Sciences, where he has been a faculty member since 1976. An expert in livestock feeding, Easter has co-authored a book on livestock production and has written more than 90 peer-reviewed articles, 11 book chapters, and numerous papers for conferences and industry publications. He also has spoken to audiences in the U.S. and 30 foreign countries on livestock feeding.

In 2006, he was appointed by President George W. Bush to the Board for International Food and Agricultural Development (BIFAD), and was appointed as chair of BIFAD in 2007. He also is a Fellow of the American Society of Animal Science, as well as a member of the American Society of Agriculture and Biological Engineers and the Farm Foundation Roundtable. He holds an honorary doctorate from Iowa State University. Easter was also a member of the British Society of Animal Science during his research career.

The 2Blades Foundation, based in Evanston, Illinois, and with offices and laboratories in the United Kingdom, is a 501(c)(3) charitable organization. 2Blades establishes and manages development programs addressing significant unsolved crop disease problems in collaboration with leading research institutions around the world in both the public and private sectors.