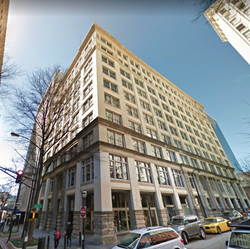 When we purchased the Grant Building in 2017, this former trophy asset was on the verge of disrepair and delinquency...In just under two years, we executed our business plan to restore the Grant Building back to its prominence...

Four Mile Capital (“FMC”), a privately-held real estate investment firm based in Louisville, CO, and Kramer Real Estate Investments, have sold the historic W.D. Grant Building, a 10-story, 130,000sf office building in downtown Atlanta. The Grant Building, built in 1898 and on the National Register of Historic Places, was purchased out of bankruptcy by FMC in September 2017 for $7,900,000M, or $61/SF.

The sale transaction closed July 31, 2019, for a price of $13,600,000, or $105 per square foot. HFF was the listing broker. The seller spent about $2M in capital improvements to the property, including a new roof, elevator and HVAC upgrades, exterior paint, marble polishing and some window replacements, and also overhauled the rent roll. “When we purchased the Grant Building in 2017, this former trophy asset was on the verge of disrepair and delinquency, which was a shame given its historical and architectural significance in Atlanta. In just under two years, we executed our business plan to restore the Grant Building back to its prominence, while leaving a mostly blank canvas for the next owner. We’re excited to see how the new owner continues to lift the Grant up to the next level,” said Eric Mallon, a founding principal at Four Mile Capital.

FMC is primarily a multifamily investor but recognized the opportunity to purchase the Grant Building at an exceptional basis while contributing to the revitalization of downtown Atlanta. “While we believe strongly in the trajectory of the downtown market, this was the only office property in our portfolio. Part of our decision to sell now involved streamlining our platform to focus exclusively on multifamily, which is the asset class we know best,” continued Mallon.

Four Mile Capital continues to pursue value-add multifamily investment opportunities throughout the U.S, with a specific focus on secondary and tertiary markets in Colorado, Virginia, the Carolinas, Iowa, and Wisconsin. They employ an opportunistic strategy in acquiring off-market properties that fall below the radar of its institutional peers, targeting investments with a total capitalization between $10MM and $100MM, and between $5M and $35M of equity.

Four Mile Capital was formed in 2016 by three veteran real estate principals: Chris Geer, Eric Mallon and Terry Simone. Collectively, they have been involved in the ownership, acquisition, asset management and property management of approximately 20,000 multifamily units representing over $1B in aggregate value and have proven their ability to identify and unlock asset value by instituting capital improvement programs and best management practices. Learn more about Four Mile Capital at http://www.fourmilecapital.com or on LinkedIn.