Mile of Music has announced that Fox Communities Credit Union will continue in its lead role of presenting sponsor for the Festival in 2020. The two organizations have been collaborators since before The Mile launched in 2013. 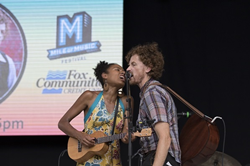 The duo Birds of Chicago performs at Mile of Music (photo: Lori Fahrenholz)

Fox Communities is proud to help lead this collaborative effort in bringing such a special music-focused event to Appleton and delivering the best experience possible to everyone involved.

A four-day festival that showcases live, original music in Appleton, Wisconsin, Mile of Music has announced that long-time partner Fox Communities Credit Union will fill the role as the event’s presenting sponsor for the second year in 2020.

The grassroots Festival will return for its eighth installment – also referred to as Mile 8 – July 30-August 2, thanks in great part to the substantial support provided by Fox Communities. Produced by Willems Marketing & Events, Mile of Music will feature free performances from approximately 225 local and national touring artists throughout the weekend at dozens of indoor and outdoor venues in Downtown Appleton.

As Dave Willems, President of Willems Marketing and Executive Producer of Mile of Music, shared, Fox Communities was one of the first organizations to lend its support in 2013 when the Festival was first coming together, and this backing has continued to expand to the lead sponsor role with encouragement, guidance and funding along the way. Willems explained, “Ever since our first meeting with the leadership team in 2013 when The Mile was just a vision, Fox Communities has shown nothing but support for the good vibes this Festival can bring to our community.”

Cathy Harvath, Vice President of Marketing for Fox Communities Credit Union, says her team looks forward to playing such a key role in making Mile of Music happen again. She explained, “There is so much support poured into this Festival each year – from the artists, business communities and non-profits making it such a huge success. Fox Communities is proud to help lead this collaborative effort in bringing such a special music-focused event to Appleton and delivering the best experience possible to everyone involved.”

The collaboration between Fox Communities and Mile of Music also includes Bike to the Beat – a community bike ride that’s been held in conjunction with the Festival since 2016 and will return with “Track 5” on Saturday, August 1.

Hosted by Fox Communities, Bike to the Beat is set to include live music stops on the 6- to 50-mile course with more than a dozen Mile 8 artists appearing. All proceeds raised through registration will be donated to local non-profits. Bike to the Beat raised more than $56,000 with 3,600 participating riders in 2019. As Harvath said, “It’s really a fun-filled weekend for everyone!”

ABOUT MILE OF MUSIC
Mile of Music is an annual roots music festival dedicated exclusively to original music and artists that launched in August 2013 as a creative and economic catalyst in Downtown Appleton, Wis. The four-day festival, produced by Willems Marketing & Events, is held at the beginning of August with the support of more than 60 Downtown venues, 50 community sponsors, 400 volunteers and numerous collaborators. It features more than 900 live music sets and 225 artists at venues along the one-mile, walkable stretch of College Avenue and the nearby riverfront.