Israeli-Hamas ceasefires irrelevant for Franciscan friars of the Holy Land who continue their humanitarian programs and projects under the constant threat of danger. 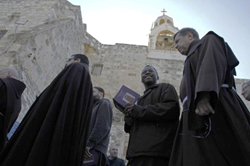 How do the Franciscans feel? Very sad.

The Israeli-Hamas ceasefires have little effect for the Franciscan friars of the Holy Land who continue to serve the Christian population in the Holy Land under considerable danger.

Fr. Peter Vasko, ofm, president of the Franciscan Foundation for the Holy Land (FFHL), commented that Christians in Gaza are caught in the crossfire between Hamas and Israel. Though the number of Christians in Gaza has dwindled to some 2,500 people, Franciscans still feel an obligation to serve the needs of this minority group in Gaza and the additional 140,000 Christians throughout the entire region, according to Vasko.

The FFHL created various humanitarian programs in the field of education, child care, housing and employment in 1994 to stem the tide of Christians leaving the Holy Land due to discrimination and violence.

Now in its twentieth year, the Foundation is experienced in meeting the needs of Christian minorities under pressure.

At the current time, Fr. Peter is thankful to report that the, “majority of our daily ministries have not been affected due to the fact that we are serving Christians both in Israel proper and in the West Bank, far enough away from the rocket fire and Israeli ground movement and airstrikes.”

Still, one wonders how the Franciscan friars of the Holy Land feel under such exterior stresses beyond their control.

“How do the Franciscans feel? Very sad,” said Fr. Peter. “The Middle East has had a very turbulent history of violence. Seeking peace for both sides to end the hostilities is easier said than done.”

He continued, “It will take a concerted effort to bring the warring parties to peace. The expectations of both sides can sometimes be unrealistic based on politics and economy.”

There is little doubt that the Separation Barrier, a concrete wall that stretches for hundreds of miles and stands over 20 feet tall factors into this equation, according to Vasko,

The present conflict between Israel and Hamas that is affecting so many of the Christians in Gaza, for which the Franciscans are responsible, was preceded by Pope Francis’ historic pilgrimage of peace.

Some have asked if the trip was in vain. Fr. Peter remarked, “Yes the Holy Father came to the Holy Land and yes he came as a peacemaker but ultimately it is up to the respective leaders to work out their differences.”

Vasko also stated that this is another reason for sadness among the Franciscans working for peace in the Holy Land. “What we felt was perhaps with the Pope’s visit some new incentives towards peace could begin but we have been disappointed by the present outcome of a new beginning to the violence we who have been here for a while know all-to-well.”

He also said, “For us it is very discouraging to see how hatred and fear continue to prevail.”

Have the Franciscans lost hope? Not according to Fr. Peter. They continue to pray for an end to this armed conflict which has caused so much pain and sorrow through the region. “We pray and we work,” he said. “That’s how we will help preserve the Christian presence in the Holy Land. That’s our goal.”

For more information on the Franciscan Foundation for the Holy Land, please visit the foundation’s press room or call Chris Weldon, PR Associate for FFHL at (866) 905-3787.

Students in Bethlehem in better times.