“Catch 44” from Christian Faith Publishing author Franco La Monica shares a humorous narrative that follows tales of fun, adventure, friendship, and many others. 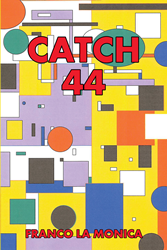 “Catch 44”: a brilliant tale woven with endless humor and musings. “Catch 44” is the creation of published author Franco La Monica, a writer of songs, poems, novels, and jokebooks. His first published novel is called Little Jimmy, followed by a comedy novel called The Pizzutos. The third book, called Dreams of a Lawman, recently got published with a preview on YouTube.

“Nonetheless, the ground they thread was predestined and set apart like some sanctified spiritual eclipse that would cause a shadow by a passing moon somewhere onto the earth, and so their shadow did appear on earth, not because of prediction or being holy but by being ‘matter of factuality!’
“Their spiritual eclipse was inverted because of a weird type of light covered every inch of earth that their eyes could see.
“Because of their type of light, the entire species of earthly bats became totally blind. They also had to wear dark glasses like movie stars, carry a parasol like Michael Jackson, and were advised by a bat committee to liberally spread sunscreen on every inch of their batty skin!
“Holy Batman! The jokers who thwarted reality and destiny were real, more real than cartoons, and twice as real as characters of a fiction novel.
“‘How real were they, Batman?’
“‘Very real, Robin.’
“And so the comedy begins.”

Published by Christian Faith Publishing, Franco La Monica’s new book is a remarkable creation that will surely entertain readers from all walks of life. Within this book is a tale of meaning and happiness.

Consumers can purchase “Catch 44” at traditional brick & mortar bookstores, or online at Amazon.com, Apple iTunes store, or Barnes and Noble.

For additional information or inquiries about “Catch 44,” contact the Christian Faith Publishing media department at 866-554-0919.