“The Second Gospel of Fred: A Book of Religious Doggerel” from Christian Faith Publishing author Fred Wurlitzer, MD, FACS, MBA is a brilliant discussion of subjects that revolve around today’s most pressing and intriguing issues in Christianity wherein Jesus holds insight and wisdom. 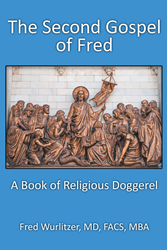 Wurlitzer shares, “Dr. Wurlitzer, MD, FACS, has written religious poetry that he calls doggerel in the style of Ogden Nash. He addresses many controversial topics in Christianity today that challenge modern minds.

“Arcane and unusual topics such as the multiverse, God thinking in eleven dimensions, and itinerant Jesus, redemption for early hominids, euthanasia, the virgin birth, abortion, what is the soul, and evolution were discussed in the first book, Gospel of Fred from the standpoint of believing in Jesus. Evidence was given for a Great Flood, destruction of Sodom and Gomorrah, and Jonah being swallowed by a gig fish. Even the most unusual biblical event often has a factual basis recently uncovered.

“As in his first gospel, a variety of subjects are addressed in this, The Second Gospel of Fred. Most topics are also controversial, including a parachuting Jesus in the Sagrada Familia Cathedral in Barcelona, the flight of starlings reminding one of the flights of souls, the Alabama abortion ban, separation of church and state, Planned Parenthood, aliens, failures, apparitions, resurrections, a female Anglican Archbishop, enjoying Dom Perignon champagne, the opioid crisis—and a multitude of other topics.

“No subject is avoided because of it being too controversial. Jesus can give us insight into understanding almost any subject. The New Testament can be as relevant today to thinking Christians as it was two millennia ago. Dr. Wurlitzer attempts to prove just that.”

Published by Christian Faith Publishing, Fred Wurlitzer, MD, FACS, MBA’s new book is an excellent discourse that tackles a plethora of topics that circle around Christianity. With this, readers will be challenged to think and discover the answers to numerous questions.

View a synopsis of “The Second Gospel of Fred: A Book of Religious Doggerel” on YouTube.

Consumers can purchase “The Second Gospel of Fred: A Book of Religious Doggerel” at traditional brick & mortar bookstores, or online at Amazon.com, Apple iTunes store, or Barnes and Noble.

For additional information or inquiries about “The Second Gospel of Fred: A Book of Religious Doggerel,” contact the Christian Faith Publishing media department at 866-554-0919.