“The Gospel of Fred: A Book of Religious Doggerel A Suspicious Believer’s Views on Christianity” from Christian Faith Publishing author Fred Wurlitzer, MD, FACS is an illuminating discussion about the multiverse, God thinking in eleven dimensions, an itinerant Jesus, redemption for early hominids, euthanasia, the virgin birth, abortion, the soul, and evolution—all tackled from the perspective of believing in Christ’s presence. 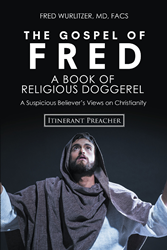 Wurlitzer shares, “Dr. Wurlitzer, MD, FACS, has written an unusual book of religious poetry that he calls doggerel. He addresses many hot topics in Christianity today that challenge modern minds.

Arcane and unusual topics such as the multiverse, God thinking in eleven dimensions, an itinerant Jesus, redemption for early Hominids, euthanasia, the virgin birth, abortion, what is the soul, and evolution are discussed from the standpoint of believing in Jesus. Evidence is given for a great flood, destruction of Sodom and Gomorrah, and Jonah being swallowed by a big fish. Put on your thinking caps because these doggerels will challenge you to think.

Although the reasons for increasing secularism in the United States has not been explained well by anyone, a significant cause is the tendency in the modern age to believe in evolution and dismiss Adam and Eve as the first humans and cast aside the unusual topics Dr. Wurlitzer addresses as being unimportant. Thereby they dismiss the Bible and church as being irrelevant.

It is Dr. Wurlitzer’s hope that his book of religious doggerel will bring many doubting Christians back to God and a Christian church, and encourage them to ask questions about unusual topics their pastors may tell them are trivial.”

Published by Christian Faith Publishing, Fred Wurlitzer, MD, FACS’s new book is a wonderful source of doggerels that is meant for all believers and will provoke their thoughts and challenge their minds to think.

View a synopsis of “The Gospel of Fred: A Book of Religious Doggerel A Suspicious Believer’s Views on Christianity” on YouTube.

Consumers can purchase “The Gospel of Fred: A Book of Religious Doggerel A Suspicious Believer’s Views on Christianity” at traditional brick & mortar bookstores, or online at Amazon.com, Apple iTunes store, or Barnes and Noble.

For additional information or inquiries about “The Gospel of Fred: A Book of Religious Doggerel A Suspicious Believer’s Views on Christianity,” contact the Christian Faith Publishing media department at 866-554-0919.