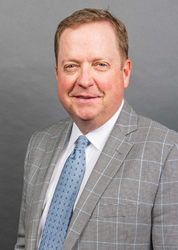 We welcome him to a high-performing department which is devoted to the noble mission of Freed-Hardeman. God has wonderfully provided again.

Law graduated from FHU in 1989 and began his 32-year career with Farm Bureau Insurance shortly after. Beginning as a local agent, he rose through the ranks to become Chief Operating Officer of Property and Casualty Operations. He retired in 2020.

Having lived in Columbia, Tennessee, since 2004, Law is very active in the Maury County community. He has served on the Maury Regional Medical Center Board of Trustees since 2017 and last year was appointed to the board of Tri-Star Bank. In addition, he is an elder of West Seventh Church of Christ where he leads singing and teaches Bible classes.

“John’s professional acumen caused him to rise quickly to the C-suite of Farm Bureau Insurance,” FHU President David R. Shannon said. “Because of his life of faith and his godly family, his church family asked him to serve as a shepherd. His commitment to Freed-Hardeman caused the board to ask him to join them as one of its youngest board members and later one of the youngest chairmen in Freed-Hardeman’s history.”

“For the university to now have the opportunity to benefit from John’s skills, influence and passion in advancement is extraordinary,” Shannon continued. “We welcome him to a high-performing department which is devoted to the noble mission of Freed-Hardeman. God has wonderfully provided again.”

Law, and his wife, the former Adrienne Sanders, have two sons, Richard and Vince.