Disrupting the traditional VC approach, startups like Freightera are working directly with high net worth individuals and private equity, opening up a vast new market for funding early stage companies. 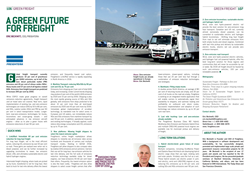 Eric is a visionary thought leader, who just authored ‘A Green Future for Freight' in the 2016 G7 Summit issue of Climate Change: The New Economy.

Freightera, North America's Online Freight Marketplace, just completed their latest round, bringing the total raised to $2.1M with $3-5M more expected from the same sources in 2016.

Freightera’s investors include Canadian exempt market private equity firms Robson Capital, Ted Snider Financial, and Silicon Valley and Silicon Beach angels, including some of the first backers of Facebook and Twitter. Investors are excited by the velocity of the two-year-old startup, with revenue growing about 300% per year, and its mission to automate and integrate the global transportation industry while dramatically reducing air pollution and greenhouse gas emissions from the sector.

“We are very excited to be on the Freightera team,” says Todd Buchanan, Equifaira Managing Partner, “Eric Beckwitt and his team have done an exceptional job of identifying and addressing a significant need in the freight shipping sector. In much the same way that Expedia disrupted the travel sector, Freightera’s online freight marketplace is transforming the freight industry. Bringing real-time, online quotes from national, regional and local carriers to shippers, Freightera is truly disruptive.”

Equifaira offers innovative ways for companies to access capital, CEO Eric Beckwitt explains, “Unlike the traditional VC approach, where firms raise a large chunk of capital, spend it over time, and then must find capital quickly to stay solvent, Equifaira helps deploy lean startup methods, where we raise smaller amounts of funds continuously and reliably, while keeping healthy cash reserves.”

The advantages are huge: “This allows companies to sell as little equity as possible during the early stages when share values are at their lowest, and also allows small individual investors to get involved at the highly lucrative earliest stages, where traditionally only friends and family, angel investors and "Dragons" buy in,” Eric notes. “In Canada, unlike the United States, private equity markets are highly regulated and accessible to small retail investors."

Stable early stage funding has allowed Freightera to scale to over $1M per year in revenue, serving over 23,000 communities in North America with more than 3.5 billion lanes. Over 2,000 manufacturers, distributors and warehouses use the Freightera system, and usage is growing rapidly. Freightera just recently expanded its lean staff to 12 people. A month ago Freightera opened marketing to the US, and is expected to grow much faster over the next 12-18 months.

Freightera's innovative B2B freight platform, designed to integrate all 730,000 plus transportation companies in North America and expand globally, has attracted the attention of leaders in the BC Tech community. In 2015 Freightera was selected by the BC Technology Industry Association for its HyperGrowth accelerator program with the mission to grow billion-dollar tech companies in BC. In June 2016 Freightera won the coveted Technology Innovation Award, TIA 2016 for Excellence in Product Innovation.

"We need to move quickly to develop and implement new systems that reduce cost to shippers while at the same time increasing profitability for transport companies and cutting greenhouse gas emissions,” CEO Eric Beckwitt continues, “Remarkably, we are achieving all three at once by directing market demand to the most efficient companies in each geographic region, and shifting long haul freight to rail, the lowest emission option now. Both our B2B shippers and transport companies are giving us great feedback and reviews, and we are grateful to our excellent customers, carriers, investors and team, which make the whole system possible."

About Equifaira:
Equifaira is a team of Experts that work Inside well-run, high growth, Founder-led businesses. We support Founders and their companies to raise capital on their own and responsibly deploy it to maximize their results for positive liquidity outcomes that are Fair to all stakeholders.

About Freightera:
Vancouver, BC startup Freightera is the only online B2B freight marketplace in North America offering instant all-inclusive freight quotes from carriers of all sizes. Freightera serves over 23,000 communities with 24/7 online access to less than truckload and truckload rates from hundreds of reliable carriers in the US and Canada. Over 2,000 manufacturers, distributors and wholesalers use Freightera. Visit freightera.com for best all-inclusive freight rates and instant online booking. http://www.freightera.com @Freightera