Who ever said the French have no sense of humor? As proof of the contrary, Le French Book has just released the complete collection of 52 Serial Shorts, which are weirdly entertaining short stories by seven of France’s literary giants. 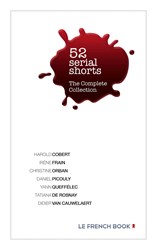 Here, they got together to play a collaborative writing game that resulted a unique study in the creative process, with 52 playful and often just plain wacky seven-author stories. One reviewer describes them as “the strangest and most uniquely clever short stories that highlight each author’s particular talents as they amuse, confound and delight readers… Think Salvador Dali or André Breton, and you have a reference point for the delights found within these little tales. And they are perfectly suited when you only have a short time to read and need that quick diversion.”

The collaborative writing game, called cadavres exquis (or, literally, delicious corpses), came from the French surrealists, and consists of one writer starting a story and passing it on to the next, who continues and passes it on to the following, and so forth. Being cheeky and brilliant, these writers set traps for each other, and yet maintain the rigor of short story writing, building characters quickly and plots that wrap up no matter how oddly, with just the right details to transport readers to the most unexpected places.

Le French Book initially released 52 Serial Shorts in four-story batches as 99-cent ebooks. Now, the entire collection of 52 stories is available for $9.99 on Kindle, and through the Kindle Lending Library for Prime users.

For Le French Book’s founder Anne Trager, this collection of short stories “embodies the very vibrant, creative world in France that we are set to make available in English. It’s also a hilarious peek into the minds of some very fine writers, and an entertaining way to prepare for the upcoming French literary prize season in fall.”

About Le French Book
Le French Book (http://www.lefrenchbook.com) is a New York-based digital-first publisher specialized in great reads from France. The company’s motto is, “If we love it, we translate it.”